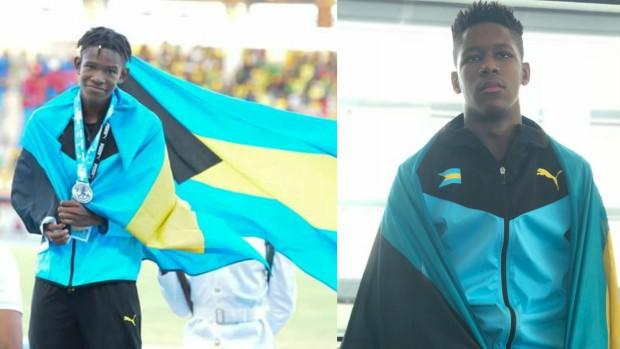 It's not rare to see siblings competing in high school meets around the state, but when you get to the international level it becomes more and more of an oddity. Mt. Dora Christian Academy junior Gabe Curtis and freshman brother Mitchell had the opportunity to represent the Bahamas in the Carifta Games. While they were born in the states, their father is Bahamian.

"I noticed that we were going in a pace that I could handle, so I decided to take the lead," he said. "For just about the whole race I was trying to stay in the lead and open up a gap, but throughout the whole race the gap kept opening and closing. Going around the bend in the last 200m I looked up at the jumbotron and saw 2nd place closing in on me and then with about 100m to go, we both started to pick it up for a sprint to the finish! I was able to out-kick him and come away with the win!"

In the 1,500, Mitchell sat back for the first couple of laps and then slowly started to pick people off towards the end. He relied on that strong kick once again to win the silver medal.

"Running at CARIFTA was an amazing experience and something I will never forget," he added. "Getting to represent the Bahamas was a great feeling and medalling in both my races topped it off!"

Gabe, who has recorded three top ten finishes at the Cross Country Finals, including a 1A championship in 2016, was in the U20 division where here placed third in the 5,000m with a time of 15:31.

"My race went out at about the pace I wanted for the first mile," he told us. "I wanted to get out fast enough to give myself a chance at a good time and to maybe reduce the kick of some of my competitors. Unfortunately, on the back stretch there was some wind and I thought it would be best to just draft off the leaders the second mile and prepare myself to make a move in the last mile."

With three laps to go the older Curtis decided to take the lead and try pushing the pace. He held the lead for two laps and then the final lap came around. At about 300m a runner from Guadeloupe moved into first place and in an attempt to not loose contact, he latched onto him.
"With 150m to go a gap formed between me and the runner from Guadeloupe, and a Jamaican runner overtook me around the bend, Curtis said". "From pushing too hard to early in the final lap, lactic acid built up in my legs and I had nothing left for the last 100m. I was happy to be able to add to the medal count for Team Bahamas. We were all racing, throwing, and jumping for each other and they were just as happy for me, if not more, for winning bronze.
The experience of representing the Bahamas at Thomas Robinson Stadium in Nassau was one he won't ever forget.

"I loved my teammates and the positive energy they brought to the track each day, he exclaimed. "I loved my coaches who did anything they could, to best prepare me for my race, I loved wearing the black, gold, and beautiful aqua marine blue, and I loved the fans that got behind Team Bahamas and filled the stadium with energy.
With one year of high school to go and a bright future ahead of him, he realizes he may someday see these same faces in Olympic competition down the road.

"Running against the islands in the Caribbean was a very unique experience, because you start to realize a lot of these faces you're seeing now, will be representing their countries come 2020 Olympics," he added. "I made sure to take it all in and meet a lot of new people.
Tweets by flrunners