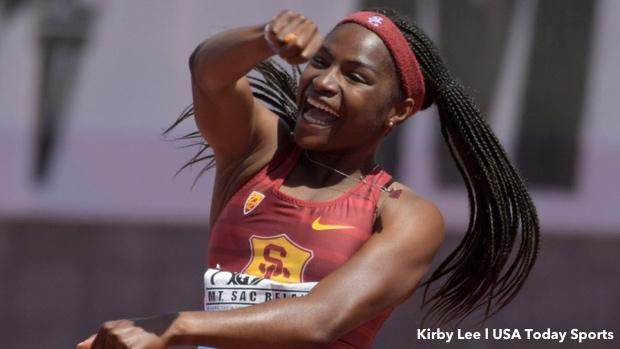 Twanisha Terry racked up six individual state championships (three in the 100 and three in the 200) as well as countless relay golds while at Miami Northwestern. While many struggle with the transition from high school to college, Terry has just done fine at the University of Southern California. She made it to the NCAA Championships in the 60m dash indoors, and recently clocked a wind legal 10.99 at the Mt. SAC Relays,

The mark was just one one-hundredth off of the American Junior Record of 10.98 set in 2015 by Candace Hill, and ranks as the top wind-legal time in the country for 2018. It also broke the school and freshman record 11.04 set in 1999 by Olympian Angela Williams.

"Going into the race I had a clear focus," Terry said. "I didn't think about much. I told myself to focus on my race. Once the gun went off I felt the other runners to the left of me. I reminded myself to stay in my drive phase and be patient. When I come out of my drive phase just run my race."
Terry didn't realize she ran sub 11 when crossed the line, She came into the race confident and didn't doubt her talent, but wasn't sure what the time would be. The former Bulls standout told us she's been working on technical issues at practice and the little details to fine tune her race.
"I ran 10.97 as a season opener (Power 5 Trailblazer Challenge) which I was shocked at," she added. "Even though, it was wind-aided (3.5 m/s) I knew I was going to be runners PR'S throughout the season. My mind wasn't really focused on the record during the meet . It means a lot to me that I am apart of history. This is something I  have worked hard for." 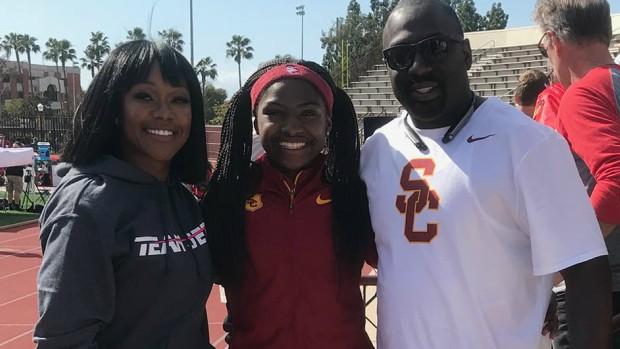 (Terry seen here with her idol Carmelita Jeter and father Antwan Terry after the Power 5 Trailblazer Challenge.)
For Terry, the jump from high school to college has been smooth and seamless. She doesn't get home sick at all and notes she's caught onto the differences between the two levels pretty quick. Pretty quick describes Terry athletically, but she's also getting the job done in the classroom in her first year as a Trojan. 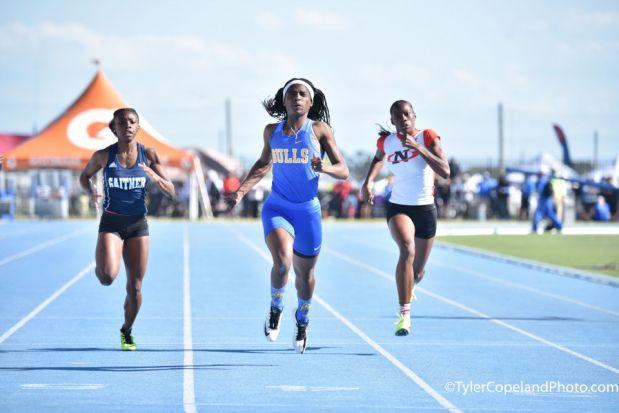 "So far my first year here is going GREAT," she said. "I wrote down my goals prior to track season and getting the 100 school and freshman record were some of my goals. I have been able to balance it athletically and academically. I was Student-Athlete of the month in September and  finished off the fall 2017 semester with a 3.85 cumulative GPA."
What can we expect in the future for the youngster?