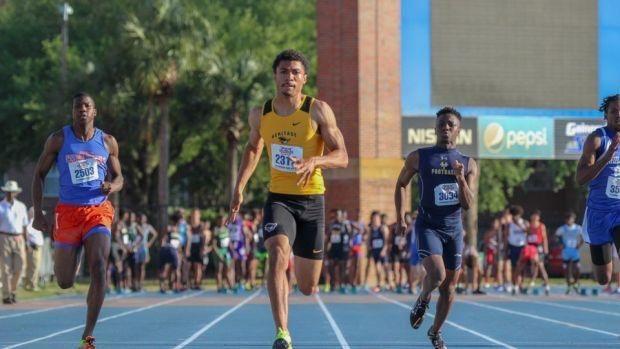 If any classification is going to set state meet records to me it is a star studded 2A.

I still remember the end of last year's meet. They were announcing the winners of each classification and 1A were getting their awards. At the opposite end of the track, sitting on a the pole vault mat, with his teammates adjacent to him sat Anthony Schwartz. The nation's number one sprinter in both the 100m and 200m dash, choked up, and slight tears in his eyes, looked at me with a look of let down. You see, he was supposed to win the 100 and 200, even with teammate Tyson Campbell and future Auburn teammate Shaun Shivers in the race, it was his for the taking. The 4x100 was supposed to go sub 40s. But none of that happened.

The 4x100m failed to get the stick around and didn't make the final. Schwartz went down in the 100m final with a hamstring injury finishing in last. He limped around in the 200 to finish the race. American Heritage finished one point shy of a title and Schwartz felt it was all his fault. In 2018, he has been nothing short of brilliant again. He ran 10.16 and 10.18 at the Florida Relays, he ran a slightly wind-aided 10.13 at Sam Burley, and just ran 10.14 at regionals, the 6th fastest performance ever in high school history. To say he's ready is an understatement. He'll be the first to tell you though that even more important than those individual titles, that teammate Tyson Campbell picked up in his absence last year, is a team trophy.

Schwartz is the favorite in the 1 and 2, but like we mentioned his teammate is the defending state champion in both events. He is only entered in the 100.The top ten boys in the 100m dash ran 10.8 or lower at regionals Future Auburn football teammate Shaun Shivers wants to prove he belongs in the discussion as well. Both Schwartz and Shivers are the only two in the 200 have run under 21s. 2A Region 4 is loaded and they will show why this weekend. Shivers was the runner-up in both events the last two years. Think he wants it bad? He may be small, but he's about as fierce a competitor as they come.

In the 400m dash, I think it's a two person race between Peter Anderson of Hallandale and Trevor Wilson of Rickards. Anderson is the 2017 runner-up and has run 47.31 while Wilson's personal best is just two one-hundredths back at 47.33. Anderson's finish will be crucial for a Hallandale team who is trying to repeat as team champions.

The distance races are also loaded with talent. Bolles, who made it to Nike Cross Nationals will have Chase Rivera in the 800 and 1,600 and Charles Hicks in the 1,600 and 3,200m. Rivera won 2A District 4 with a personal best of 1:52.74 and followed that up with a 1,600m PR of 4:14.26 at regionals. His toughest competition in the half lap will come from Danny Ferro who ran 1:52.55 to finish 2nd at FSU Relays. Ferro has won every other race this season and is the 2017 state champion in this event.

Five guys in the 1,600m field are all under 4:20 with Rivera's 4:14.26 the top mark. Don't count out teammate Charles Hicks along with fellow Jacksonville resident Nathan Jubran of Bishop Kenny and FSU signee Paul Stafford. Stafford is trying to duplicate the success of current Nole Caleb Pottorff who cleaned house in the distance events last year.

They don't call Hallandale "Hurdle High" for no reason. The Chargers who are looking to repeat as team champions, have the state's best hurdler in 2A in Amari Johnson. Johnson is the lone athlete in the field to have broken 14s in the 110m hurdles and has the state's top time in the 300m distance as well. Milton Ingraham is the state's top thrower regardless of class in both the shot put and discus and should give them an easy 20 points.

Speaking of races, that should be won easily, the 4x100m relay and 4x400m relay fall into those categories as the American Heritage boys are knocking on the door of sub 40s and 3:10 in the 4x4.

Our virtual meet has Satellite in the mix for the title and I know what you're thinking, but Todd you haven't mentioned any of their athletes. Noah Mumme is the favorite to win his third straight pole vault championship  and teammate Luis Morris should also fare well in the event. Add in a 4x100m relay thats projected to score points, one of the best 4x8 teams in the field, a slew of distance qualifiers, and a shot put trio of Henry Covington, J.D. Arnold, and Alex Iervasi, the Scorpions are definitely podium contenders.

Last year the Bolles girls defeated American Heritage and Hallandale, but even with Caitlin Collier, I think the road will be a little more difficult for the Bulldogs. For starters they lost several distance runners and then earlier this season hurdler Mone't Bowen, a Howard University signee went down with injury. Collier, arguably the best distance runner to ever come out of Florida and a Stanford signee has won the last four 800m state titles, the last three 1,600m championships, and the last two in the 3,200m, totaling nine individual gold medals. She will run in the 800 and 1,600m this weekend as well as a relay or two. Although the distance fields are very competitive, she is in a class of her own with a US#1 800m mark of 2:04.87 and US#2 1,600m time of 4:44.51. Other names to watch in those two events include Jatana Folston (800), Tsion and Mahdere Yared as well as Natalie Varela, Rebecca Clark, and Lily Henne in the 1,600m.

The key to American Heritage's success will rely in their sprinters. Sheri Ann-Norton, Morgan Rhett, and Myrka Cadet will give the Patriots a solid amount of points in the 100 and 200 as well as Danielle Bess and Kenya Thompson in the 400. Denise White of Bay High School in Panama City doesn't get a chance to see a lot of these athletes being from the Panhandle, but she's a fighter as is Jameesha Moorer of Lakewood High School. At one of Moorer's recent practices was fellow Lakewood alum and new Seattle Seahawk Shaquem Griffin. If you want inspiration before a major meet it doesn't get better than that.

Maiah Walker, a UNC signee, is consistently one of the best in the nation and looks to finally be healthy. Can she get that state title that eluded her last year after finishing first in the prelims? Folston is also entered in the race as is Danielle Bess, the reigning champion in the event.

Much like the boys, Hallandale will rely on it's hurdlers to carry them to the finish line. In the 100m distance Sydney McGinley and Ashantae Harvey are two of the best while McGinley, Ashonti Warner, and Takira Williams will carry the torch in the 300m hurdles. They will also score big in the relays with a top three finish in the 4x1 and 4x4 and victory in the 4x8 projected. It doesn't stop there as the field events continue to add more points with the state's top throwers Amani Heaven and Nelia Simeon as well as Destiny Castillo and Takira Williams who own the best long jump and triple jump marks. Bolles Laine Roberts is looking for her first state title after finishing second last year.