Bolles senior Caitlin Collier continued her dominance of the distance events. Two weeks after taking individual titles in the 800 and 1,600 at the state meet and running a state record and US#1 2:02.77 and 4:49.47, Collier returned to Boston for the Adidas Dream Mile. Last year, the event was contested at 1,500m and the Stanford signee finished 5th in 4:19.05, but this year was no challenge for the nation's number one distance runner who won the event in a new meet record and state record mile time of 4:38.48.

"We had some concerns about the rain, but that wasn't too bad," Coaches Matthew Morris and Dan Dearing told us. "Our plan was to go to the front and run the best race she could and that's how it played out. At championship races like this, we don't want to be too concerned with the times. Our was to win the race and to get a record time was a bonus." 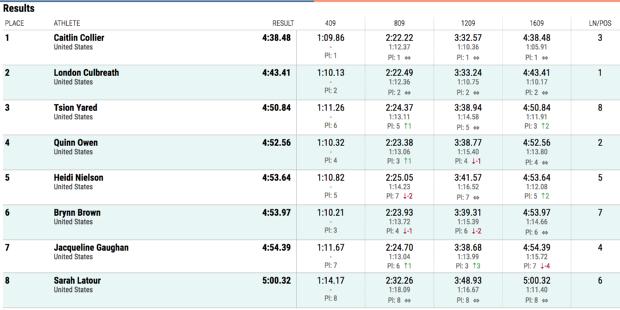 A look at Collier's splits have her leading the race from the get go and running a 65 second last lap to win by nearly five seconds over a stacked field of the nation's best milers.She was happy with her time afterwards helped her realize that she's capable than more than she thinks.

"I stepped on the track wanting to get out in the front early and hit 69s for the first lap and just take it from there," she said. "I ran the meet two years ago so I knew the field was going to be competitive so I decided to run my own race and if people chose to hang on I would not worry about it and make my kick when I felt I should. I'm very happy with my time."

The previous record was 4:41.80 set last year by Lexy Halladay. The results should come as no surprise to her coaches. She's been training on a consistent theme throughout the season.

"The intensity and volume can ramp up at times but we try to touch on many different qualities throughout the season," they said. "This was race important because we have other important races coming up as well so we couldn't back off too much for this one."

Last weekend at the JAC Distance Classic in an open 400m time trial, Collier ran 54.14s, the 26th fastest time in the country, and showing off her stellar range.Coach Dearing and Coach Morris wanted her to have that time on her resume and it ended up being a part of her workout, which consisted of some speed endurance work afterwards as well.

Also, in the field was Pine Crest sophomore Tsion Yared who ran the second mile of her high school career.  Yared fought from fifth to third and crossed the line in 4:50.84. Afterwards she said it was an amazing experience to run against some of the country's best athletes and turn in a new personal best.

"It's not everyday that you run in an eight person race that is filled with so much competition," she said. "We were treated very nicely and greeted with tons of gear. Weather conditions were very different than what I usually run in, which was nice because I love to run in the cold."

Coach Paul Baur was also pleased with her performance.

"In a very impressive field she was very composed, he said." "She hit her paces perfectly and then had a strong finish to separate from her pack and finish third. We told her that extra gear she has would be the difference maker and it was."

Up next for Collier, will be a trip to the Music City Distance Carnival in Nashville, TN in two weeks. She will be in the A section of the women's professional 800m while several of her teammates will run in the open 800 and 1,600. After that, she will race in Indiana at USA Juniors in hopes of making the USA team again for the IAAF World U20 Championships in Finland. Yared and several of her Pine Crest teammates will compete next at New Balance Nationals in North Carolina.