Bolles Caitlin Collier continued to make her assault on the 800m high school national record of 1:59.51 set by Mary Cain of New York in 2013. The Stanford signee lined up against a field of collegiate and pro athletes at the Music City Distance Carnival and was in the back of the pack as a rabbit paced the group through 400 meters under 60 seconds. But Collier, who recently ran 54.15 at a time trial at her school, used that quarter-mile speed to move up to the group and run a massive personal best time of 2:00.85s, nearly two seconds better than her 2:02.77 from state, and the fifth fastest ever in high school history.

Collier's performance came two weeks after another resume booster, a win at the prestigious Adidas Dream Mile , where she broke the meet record in 4:38.48. She told us her training that first week was really hard, but then eased up during the week before she headed out to Nashville. Collier added she was happy to run the 800 one last time before junior nationals.

"I just wanted to prove to myself what I am capable of," she said. I knew I was ready to run a good time, but I was nervous since the field was so stacked and I had been feeling a little off a few days prior."

Much like she did in last year's Festival of Miles in Missouri, where she ran 2:03.32 against a similar field, Collier told us her game plan was to try and be a few steps off the pacer through the 400 and then try to react to what was going on around her.

"I ended up not being too close to the pacer and got stuck in the back pack from the start, so once I hit the 500 I just kept my head up and waited until I could make my move," she told us.

That move came in the last 125 meters in the race with numerous girls jockeying for position, a sub 2:00 showing, and the win. Collier went wide into the middle lanes and tried to pass as many people as she could. 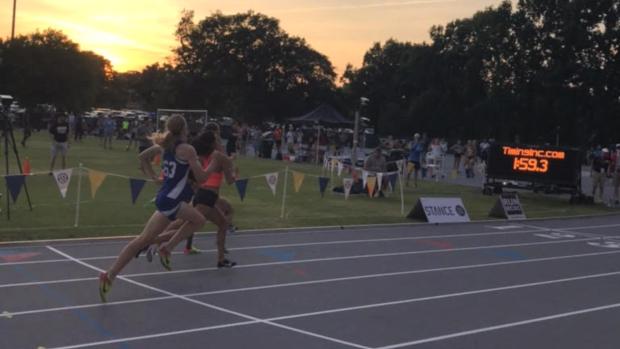 "I knew that if I was in contact with the other women that I would come home with a PR and getting two flat was very exciting," Collier said. "It's an honor to be in the top five all-time in my event so hopefully I will be able to lower my best time and really establish my position on that list."

Collier, a fierce competitor hates to lose. However, more important than crossing the line in first, but in the end she is really looking to improve her times.

"If winning comes along with that then it's just a bonus," she said. "Going sub 2 has always been a dream of mine for a while now so I would love to take a shot at that at junior nationals, but if that's not the right time then I will be looking to better my new PR in whatever race I compete in afterwards.