While IMG Academy's Jaylen Slade has been stealing the attention and the show across the country at various meets including a national record last week in the 200 at the University of Arkansas, we may need to start paying attention to another in-state athlete competing locally in the event.

Osceola senior Markevus Jackson yesterday at the St. Cloud Invitational ran a wind-legal 20.99 in the 200 meter dash, which is the fastest time run so far in the state of Florida and the nation this outdoor season. Jackson also won the 400-meter dash in the same meet with a new PR of 47.68, which is just only 5 hundredths of a second off the state's best time. 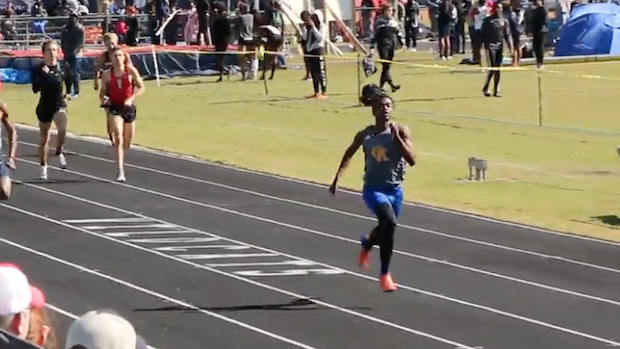 Remarkable jump in performance from his shortened junior season due to the Covid shutdown as Jackson had run 22.22 in the 200 and 49.33 in the 400.

Earlier in the week, Jackson had showcased his improved speed clocking a 10.74 PR in the 100 in a developmental meet on February 23rd into a slight head wind and wind-legal.

Plenty of other stellar performances to note from the St. Cloud Invitational. The 100-meter dash in the absence of Jackson saw two boys venture into the 10.7's with Zack Sedaros of Viera won with a 10.72 clocking, while Jacari Kennedy of Jones was the runner-up at 10.79. Their times were the fastest and third fastest wind-legal performances of the season in Florida.

Lakeland junior Gabriel Dindy is one of Florida's very best throwers and showed it at St. Cloud Invitational launching a new state leading mark of 165 feet and 1 inch (50.32m), while throwing just off his season-best (FL #2 ranked) in the shot put winning that event as well with a throw of 52 feet and 8.75 inches (16.07m).

Alanie Rivera of Harmony and Kamari Dawn of Rockledge battled it out down to the line to decide the girls 800 with Rivera in 2:18.20 getting the slight edge over Dawn in second place at 2:18.39

Kathleen High's I'Asia Wilson broke 12 seconds for the first time in the 100 meter dash with a wind-legal victory of 11.91. Wilson has the fastest wind-legal or wind verified time in the state so far this season with half a dozen others breaking 12 seconds wind-aided or without wind information.

Jeniya Burton of Jones High School was impressive and dominant in her girls 400 win at the St. Cloud Invitational winning by a full second in 56.03. The senior two years ago as a sophomore was able to work her time down to 55.88 and finished 5th in the 2A state finals of the event.