Saint Andrew's senior Matthew Mulé had to close late and strong on his outdoor season after missing a good chunk of it not due to the virus that everyone in the world is focusing on in the coronavirus, but a virus that annually affects teenagers more than anyone in mononucleosis.

After starting the outdoor season strong with a 4:15 1600 meter PR opening win in the Cardinal Gibbons Preseason Distance Carnival on February 13th, Mulé missed the next six weeks of racing. He finally returned to action at the start of April. He didn't have his strength back to racing like himself until the regional meet on May 1st when he dropped a PR again with a 4:13.

Facing off against the deep and talented group of challengers from the Satellite High School program including Gabe Montague and future University of Florida teammate Joe Wester in the 2A state finals, Mulé was able to chase down Montague and hold off a hard-charging Wester for his first state title in another all-time best run for him at 4:11.

Feeling like he still had unfinished business from a senior year of the outdoor season which saw him miss several high-profile distance-loaded fields at Satellite and Dunbar in late March, Mulé registered this past week to race in the 800-meter run at the first Golden South Series meet on Saturday night at Dunbar. 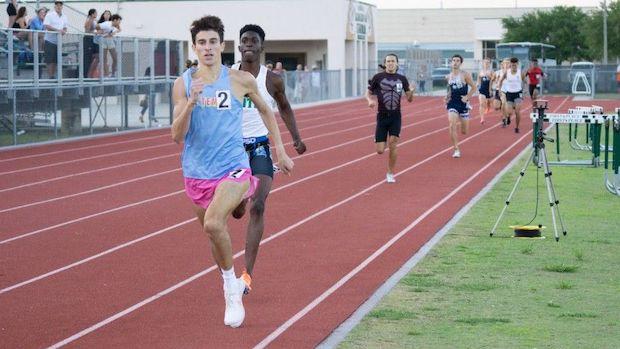 After top seed and 1:52 best Cole Piotrowski scratched after winning the mile earlier in the meet  with a 4:22 run, Mulé then became the top seed and favorite but with a trio of 1:55 performers this season including Palmetto's Saindeley Dorsainvil breathing down his neck the entire race.

Mulé had run a personal best of 1:54 back in February while clocking consecutive 1:55 performances at the region and state meet including a state runner-up finish doubling back from his 1600 win against future college running mate Wester.

On Saturday, Mulé moved up into the state's top 10 rankings in the event holding off a strong challenge by Dorsainvil (2nd, 1:54.23) with a 1:53.86 personal best victory ahead clocking almost even 57-57 splits for his race.