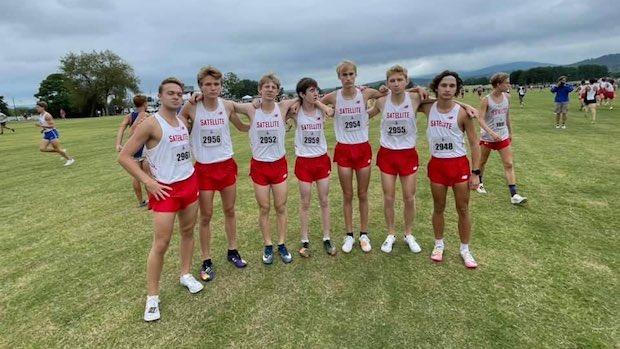 The Satellite boys traveled up to Huntsville, Alabama to compete at The Southern Showcase hosted on the same John Hunt Running Park course that also the Running Lane National Championships are held on. After a great experience last post-season and running fast times for Coach Doug Butler's squad, they decided to make a mid-season hike up to see if they could roll again testing themselves against quality out-of-state competition.

The result was a very solid runner-up finish and a team average nearly dipping under 16 minutes at 16 minutes flat exactly. Justin Wilson led the squad once again breaking into the top 25 individually with a time of 15:36 to showcase the depth and fast times produced on this course. He ran 15:38 on the same course last November at the Running Lane Champs, so Wilson is ahead of schedule and was a good bounce-back race after finishing 12th at the Florida Horse Park Invite.

Teammate Aidan Mason joined him under 16 minutes in Huntsville as the team's second finisher with a time of 15:52 in 41st place. Mason, who was projected as the team's second-best returnee entering the season, had been somewhat inconsistent or not able to hold the #2 runner spot up until this point this season so this meet certainly got back him on track with a season-best sub 16 run.

Andrew Mahorner in 58th place at 16:05 with a personal best time and Dayton Law in 63rd place at 16:08 were both a shade over 16 minutes. Law was one of the few Satellite runners to not hit a season-best after his great 7th place effort of 15:57 at Cecil Field earlier in the season.

The biggest development for Satellite out of the meet had to be Carson Waggoner stepping up as their fifth runner dropping his prior season-best 5K time of 17:04 from Florida Horse Park all the way down to 16:19 in 80th place. Despite having a front runner in Wilson running fast time of 15:36, Satellite boys still kept their top 5 spread down to 43 seconds thanks to Waggoner's race.

FL #3 ranked Satellite still remains the favorites to repeat in 2A ahead of the likes of Berkeley Prep and Bolles, who they defeated head to head at Florida Horse Park while might have closed the distance on Florida's top two ranked teams Viera and Belen Jesuit with their team results in Huntsville this weekend.

The Satellite girls meanwhile finished 26th out of 31 teams in the championship race and were led by top finisher and sophomore Braelyn Wahy cracking into the top 50 with a time of 19:29 for 47th place.