In the morning, it was the Mantecon siblings in seventh grader Marcelo as the middle school boys race winner in 12 minutes flat on the 2.1 mile course, while younger sister and fifth-grader Marisa took the middle school girls race with a 14:42 performance. 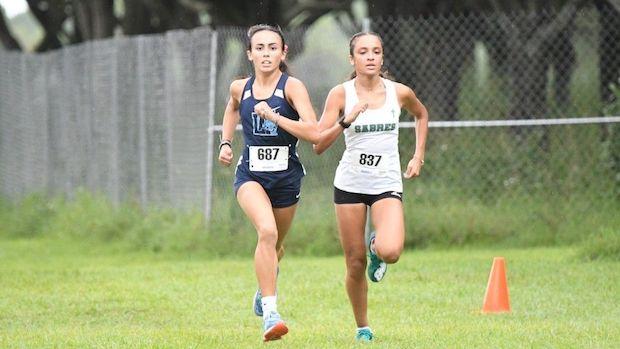 The varsity high school girls in the evening saw an exciting race down to the finish between Our Lady of Lourdes Academy junior Olivia Fraga just holding off St. Brendan junior Emma Hencock for the win as both runners were timed at 20 minutes flat. It was Fraga's second straight major race victory in cross country after running a personal best of 1:51 to win the 3A/4A race last Saturday at the Spanish River Invite.

Meanwhile, Hencock has now been a runner-up in four straight races including her last two races being painfully close to victories at Miami-Dade County Youth Fair Champs against Fraga and last weekend in the 1A/2A race at Spanish River against Pine Crest's Brooke Hooper. Her consistency in performance and competing hard is commendable, so she is due to enjoy a victory here soon.

Annabella Cardona, a sophomore at G. Holmes Braddock and sub 11 mintue runner for 3200 meters, rounded out a very talented top 3 with her third-place time of 20:13. Cardona helped also lead the Braddock girls to a strong runner-up finish with 58 points to finish ahead of quality flrunners.com top 25 ranked teams such #25 Gulliver Prep (3rd, 77 pts) and #23 St. Brendan (4th, 83 pts).

Despite sitting our their top 3 runners in Adam Magoulas, Joshua Ruiz, and Evan Torres, the FL #2 ranked Belen Jesuit boys dominated the team competition taking 7 of the top 9 places in the varsity boys race led by a freshman as the race champion in Joey Diaz-Quintero with a time of 16:33. After running 16:38 at Florida Horse Park and 16:34 at King of the Hill, Diaz-Quintero ran 17:13 last weekend at the Spanish River Invite in the team's defeat to Viera. The outcome might have been different against Viera with the talented but inexperienced freshman Diaz-Quintero running closer to the performance in his first major invitational win on Friday at Thompson Park. Nonetheless, the future is bright for Belen Jesuit's continued success with the team having two of the state's fastest underclassmen runners in freshman Diaz-Quintero and sophomore Ruiz.

The only two individuals in the race who were able to break up the Belen Jesuit top 7 (really their top 10 in holding out their top 3 runners) were G. Holmes Braddock senior Gabriel Garcia (5th, 16:55) and Coral Reef junior Ryan Sarafoglu (7th, 16:59) both dipping under 17 minutes on a fairly honest and challenging 5K course for South Florida.

The Belen Jesuit boys tallied up a dual meet-like score of 16 points with Garcia being the one to stop them from scoring the perfect score of 15 points. The FL #9 ranked Christopher Columbus boys were a distant runner-up with 83 points, but did not run their top four runners with their normal #5 runner Marcus Mata as their team's top finisher in 10th place at 17:01.