Many of the same names we saw at the North Port Invitational clash in the elite race there will be facing off against on Saturday at the HOKA flrunners.com Invitational's Race of Champions girls' race.

Headling the field at the meet will be the girls from Cambridge Christian featuring Mary Ellen Eudaly, Caroline Lehman, and Eliana Black upfront. Eudaly opened her season with teammate Lehman two weeks ago at North Port with a swift 17:51 performance, while the state's two-mile record holder Lehman coming back from a summer injury ran for second place in 18:04. The 8th grader teammate Black was third in the same race with a 5K PR of 18:16. The potential is certainly there for them to go 1-2-3 again in the ROC at the flrunners.com Invitational even with a stronger field. Only a half dozen girls have ever broken 18 minutes at Holloway Park, so let's see if at least one if not multiple Cambridge Christian girls can do it on Saturday. The runner most likely to break them up was fourth in that race at North Port Invitational and a winner earlier this season at Holloway Park at the Seffner Christian Invite in IMG Academy's Layla Haynes. The native of Barbados, Haynes is coming off running a scorching 17:40 PR at the Desert Twilight meet in Arizona last weekend and looking for a second try to match up with the Cambridge Christian girls after finishing fourth place at North Port in 18:27.

The field is incredibly deep beyond the top four seeds with 18 girls in the meet who have gone sub 19 minutes for 5K this season along. A long list among that group to watch include Ava Povich of Evangelical Christian, Brooke Reif of Wharton, Emily Knopfle of Olympia, Haley Thornton of Palm Harbor, Addison Boyer of South Fork, Olivia Fraga of Our Lady of Lourdes, Grace Marston of Lakewood Ranch, Lily Henne of Lake Minneola, Megan Wells of Newsome, Brooke Hooper of Pinecrest, Emma Hencock of St. Brendan, Anna Rupp of IMG Academy, Madeleine Gear of Cambridge Christian, Christiana Coleman of Dillard, and many more capable of top 15 finishers in the Race of Champions which is a tougher feat than cracking top 15 for All-State at season's end.

Povich has been one of the best runners in the Southwest corner of the state with multiple victories. Reif has already raced well this season at Holloway Park with a runner-up finish to Haynes at the Seffner Christian Invite. Knopfle is one of the state's brightest freshmen stars.

Thornton is a 4:50 miler state champion and opened her season with a win at Holloway in the Jim Ryun FCA Invite. Boyer dropped well into the 18-minute range last week and was a winner earlier this season at Vero Beach Invite.

Fraga is the front runner and converted sprinter from track coming off two big wins including the Spanish River Invite in a 18:51 PR performance. Marston had her best race of the season running in the 18-minute range at North Port after running sub 5 minutes for 1600 and sub 11 for 3200 during the track season.

Henne was last spring's 1600 meter state champion in 2A and actually had back-to-back top 10 finishes at the flrunners.com Invite back in 2017 and 2018.

Wells leads one of the top 4A schools in the state at Newsome with sub 19 All-State credentials. Hooper is a surging sophomore coming off a big victory in the 1A/2A race at Spanish River Invite.

Hencock has consistently been grabbing runner-up finishes left and right this season. She won't likely get second in Saturday's, but can still finish high in it and make pick off some of the girls she has taken close losses to this season. Coleman of Dillard caught many sleeping on her when she went down to the wire with Fraga at Spanish River to run 18:52. Look for her to reinforce that performance at the flrunners.com Invite.

Rupp is the second new impactful out-of-state transfer to IMG Academy from Kentucky and has been a solid addition so far. The sophomore Gear has improved her 5K time by over a minute from last year at 18:52 for her season best since coming over from Cambridge Christian as their squad's #4 runner. One cannot forget about Carly McNatt, who actually holds the course record at Holloway Park from her 2019 victory as a freshman in a time of 17:19. She is definitely not in that kind of shape currently just coming back from injury but will look to get stronger week to week racing herself in better fitness after a 19:04 return performance last week on the fast Desert Twilight course in Arizona.

The team competition will have Cambridge Christian as the prohibitive favorites with the likes of Osceola Seminole, IMG Academy, Our Lady of Lourdes Academy, and Newsome as the closest challengers to them. Another pack of squads including Berkeley Prep, Parkview (GA), G. Holmes Braddock, Lakewood Ranch, Olympia, St. Brendan, Gulliver Prep, Bishop Verot, Naples, Fort Myers, and others will be looking to fit inside a formidable top 10 in the standings.

The matchup between Osceola and Our Lady of Lourdes Academy will be intriguing within the race as those two teams are among the top-ranked squads right now in 3A, but have yet to face off this season. Osceola has four girls that have run under 20 minutes this season with a fifth runner sitting at 20:05. Our Lady of Lourdes has a team average right now at 19:53 for their top 5 runners compared to Osceola just a few ticks faster at 19:50.

IMG Academy was third at North Port Invite behind Cambridge Christian and Osceola. They are hopping with the addition of McNatt in race #2 of the season will help them leapfrog at least into the second position.

This will be the first major invite of the season for the Newsome girls, who have laid low in smaller invitational races so far this season. However, they have a proven track record as a state champion caliber team including a state championship in 4A in 2019 as well as a state runner-up showing last year in 2020. 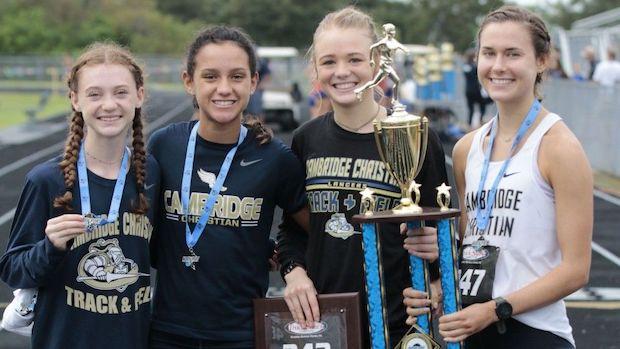 Cambridge Christian will be the class of the field though if all their girls are racing and hitting on all cylinders with the potential to sweep the top 3 places individually. If their performances were not noticed nationally at the North Port Invite, they should be on an even bigger stage in the 2022 running of the flrunners.com Invitational sponsored by Hoka.