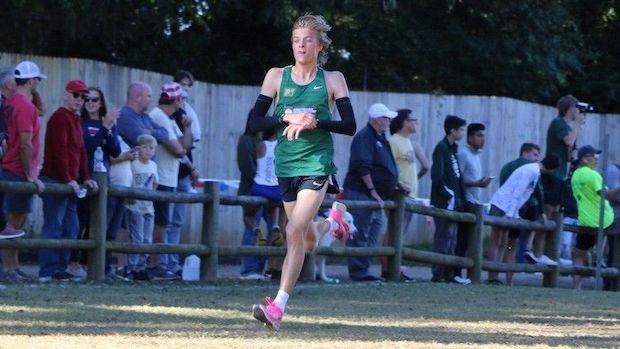 Note: Eastbay Regionals has now updated the number of national qualifiers back to 10 per region after initially announcing only 8 per region earlier this season.

36 of Florida's 100 fastest boys 5K cross country performers this season are slated to race on Saturday at the Eastbay South Regional in Charlotte, North Carolina including two dozen sub-16-minute runners.

One of the deeper and fastest groups of runners that the state has sent to this meet in several years with the obvious absence of the event among other national events last year due to covid cancellations.

Leading the charge for the state of Florida, but maybe not is Rheinhardt Harrison of Nease as the 3-time 4A state cross country champion is still weighing his decision to continue racing into the post-season of cross country or get ready for a track season with a certain pursuit of a sub-4-minute mile.

Harrison has been a dominant force locally in the state of Florida over recent years but has not ventured too often out of state against elite high school competition to measure himself against great runners from elsewhere. So Rheinhardt is somewhat of a mystery and unknown to the rest of the country actually seeing compete despite his national notoriety that started running a 4:01 mile as a sophomore.

The University of Oregon commit has the third-fastest 5K time in the entire South Region behind only the likes of Sam Rich from South Carolina at 14:38 and Kevin Sanchez from Texas at 14:44 with Harrison's 14:45 season-best race at the New World Fall Spectacular being the fastest Florida high school 5K cross country performance all-time. Harrison would certainly be considered one of the top contenders to win the South Regional if he chooses to race and could threaten Matt Mizereck's 14:51 performance in the 2009 race as the fastest Florida performance ever in the meet's history.

Florida has had over a decade long drought since its last regional boys' champion when Jimmy Clark of Creekside won the race in 2010 with a 14:55 performance, so Harrison would join a shortlist of only 5 past Floridians to win the South Regional boys' title (that has been held every year since 1979 with the exception of 2020) if came across the line first on Saturday. When Clark won in 2010, he had snapped an even longer drought dating back to the last Florida winner in 1992 by Brian Good from Pensacola Booker T. Washington. The 4A state runner-up to Harrison at the state meet as well as Florida State University commit in Viera senior Michael Toppi owns the fifth-fastest time in the entire Southeast Region at 14:55 to make him a good candidate as one of the potential top 8 individual qualifiers for the national meet in San Diego.

Toppi was the second-fastest performer at the FHSAA State Finals two Fridays ago with a 15:17 performance at Apalachee Regional Park and will likely need to run a time in between his 14:55 personal best at New World and his state meet time to have a shot at qualifying for Eastbay Nationals.

He is hoping to have 3 straight weekends of elite out-of-state racing opportunities as he is racing with his 4A state champion Viera squad at The RunningLane Championships in Alabama on December 4th and would be headed to California the week after that for Eastbay Nationals if finishes in the top 8 in the seeded race on Saturday at McAlpine Greenway Park.

Two other state champions from Florida in 3A champ Patrick Koon of Leon and Matthew Stratton of St. Johns Country Day School also have realistic shots at sliding inside the top 8 for nationals with a good race on Saturday. Koon, in particular, has great upside being only a sophomore, but the fastest in the state's history ever as a 10th grader with a season-best time of 15:05. Koon's best race of the season came in winning the FSU Pre-State Invitational last month in a time of 15:09 beating Toppi in their last head-to-head matchup as well as all the other top runners in the state of Florida with the exception of Rheinhardt Harrison being absent. It is a rare feat for an underclassmen boy to qualify for Eastbay Nationals (formerly Foot Locker), but Koon has already shown the talent and willingness to put himself up near the front of races to give himself a shot this weekend.

The last sophomore from Florida to qualify for the formerly called Footlocker Nationals was back in 2016 when Charles Hicks of Bolles made it with a ninth-place finish of 15:07. Florida has never had a 3-time boys national qualifier either, so if Koon were to qualify this year and the next two following years could potentially make history.

Koon has the 20th fastest time currently in the region and just behind him in the 21st spot with a nearly identical time of 15:05 on the same New World course is 1A state cross country champion Matthew Stratton of St. Johns Country Day School. The University of Florida signee Stratton might be the most overlooked among the state's elite runners heading into this race and could surprise many and sneak into the back end of the top 8 for nationals and potentially leapfrog the likes of Toppi and or Koon. Stratton did what he needed to do to win his first cross country state title two weeks ago being the last race of the day in the heat at 10 am with a 15:40 cruising effort at Apalachee Regional Park.

Stratton had let it rip though at his regional meet in the week prior hosted at one of the state's fastest 5K courses at New World Golf Course in Jacksonville with a 15:05 personal best effort. He was also third at the FSU Pre-State Invitational just behind runner-up Toppi and 7 seconds off race winner Koon with a 15:16 at Apalachee for one of his better races of the season. So the distance or gap between himself and the other top runners in the state is small.

After the big four from Florida, another deep pack of runners from the state who have run in the 15:20's to 15:40's range exists that could earn All-South Regional honors and potentially lower their already fast existing season-best times. Brayden Seymour of Hagerty and Ben Kirbo of Chiles finished right together in 3rd and 4th place in the 4A state race behind Harrison and Toppi two weeks ago with times of 15:38 and 15:39 respectively. Both have gone faster this season with a 15:23 best for the senior Kirbo and a 15:32 best for the junior Seymour.

Kirbo only won one race the entire season but was steadily one of the state's top performers in many of the major invitational races and this is his second weekend in a row traveling to North Carolina after posting a 3200 PR time of 9:28 at the Dash for Doobie meet this past weekend.

Seymour might be one of the top male distance running talents ever for his coach Jay Getty, who coached a two-time Foot Locker South Regional girls' champion in Jenny Barringer back in 2003 and 2004. Barringer was an All-American top 10 finisher at the national meet in both years too.  Seymour might be a year away from contending for a national spot but can lay a good foundation for that next jump on Saturday. Along with the sophomore Koon, Seymour is one of the best non-seniors from Florida in the meet that looks to come back next year as well as Bolles junior Aidan Ryan, who was the 2A state runner-up with a personal best 5K time of 15:35. Ryan really emerged down the last half of the season as a front runner for the eventual 2A state team champions and this weekend will shift his focus to his individual pursuits and push for a sub 15:30 race. The race in Charlotte will be the last of his junior cross country season and can set himself up to be looked upon as one of the state's top returnees for his senior season in 2022. Berkeley Prep senior Ethan Lipham was the 3rd place finisher in the 2A race behind Ryan and champion Nick Carpenter (not currently entered for Eastbay South Regional) in 15:37 and will be racing in Charlotte after throwing down a 9:22 3200 PR this past Saturday on the track to tuneup in between his state meet race and the Eastbay South Regional this weekend.

Another runner to watch from the 2A classification will be Montverde Academy's Riley Novack, who has never had a problem getting out quick in his race starts which will be required of all runners in order to finish high in this field and how races normally unfold at McAlpine Greenway Park in Charlotte. Novack was fourth in the 2A state race just behind Lipham and had a total of 7 sub 16-minute 5K races this season.

The state of Florida has had a three-year gap since the last national qualifier for the boys (including the 2020 canceled year) and it has been since 2015 when Florida last had more than one boys' qualifier.

While it will be tougher this year with meet management deciding to go back to taking only 8 qualifiers (1979-2004 years) instead of 10 (2005-2019 years) from each regional race, the historic talent and depth traveling from Florida to North Carolina this weekend seems likely that the state will have some representation at the Eastbay Nationals on December 11th.