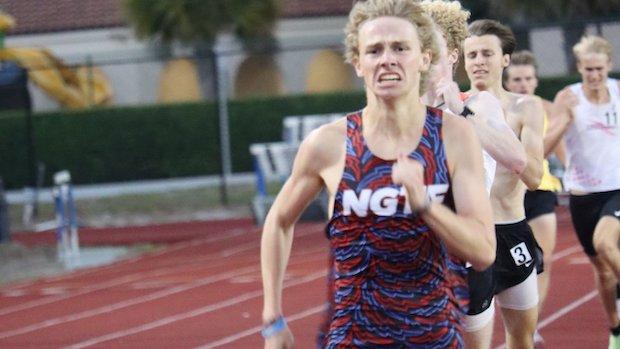 Bolles junior Aidan Ryan, fresh off winning a pair of state titles at the FHSAA State Championships in the 2A boys 1600 and 3200 meter races, added a new 800 meter PR on Friday night at the JAC Distance Classic hosted at the Bolles School in Jacksonville.

In the deepest field of the meet including recent 1A state champion Asher Dobrin of Oak Hall, Ryan won the race in a time of 1:52.91, which is the sixth-fastest time run on the season in the state of Florida. The junior Ryan had a prior personal best of 1:57.28 to chop off nearly a full 5 seconds off his time after running faster relay leg splits including helping the Bolles squad to a 4x800 meter relay state title in the prior weekend.

After finishing as a state cross country runner-up in the fall and his continued success and time drops this season, Aidan Ryan has be viewed as one of the state's top returning distance runners next year among a handful of others.

Dobrin also dropped a new PR in second place at 1:53.86 after winning the 1A state title last Wednesday in Gainesville with a time of 1:55.33. His Oak Hall teammate Caden Montini was right behind him in third place at 1:54.86, while 10 runners in total in the race would break 2 minutes. One of the top female performances of the night belonged to Ponte Vedra sophomore Lindy White in the girls 1600 meter run, which was combined to be a co-ed race with the boys. After venturing into the 5:00's recently at her region and state meet performances including an All-State 5:02 sixth performance in the 3A girls 1600 meter race, White just missed breaking 5 minutes as the top female finisher in 5:01.00. White had Buchholz junior Kate Drummond to push and challenge her for much of the race as Drummond was ultimately the second female finisher in the 1600 at 5:06.48. Drummond's teammate Emerson Miller was the winner of the boys 1600 meter run as he just missed break 4:20 with his final time of 4:20.47. Miller was just off his personal best of 4:18 from the Florida Relays earlier in the season and was coming off a third-place 9:17 All-State finish in the 4A boys 3200-meter race at the state meet. In the rarely contested 5000 meters on the track, Ponte Vedra junior Grant Doherty was able to outlast 2021 graduate of Pedro Menendez High School in Ian Kelbert (2nd, 15:49) to clock a new personal best of 15:41, which betters his 15:56 run on the grass this past fall in cross country at the New World Fall Spectacular hosted at Cecil Field.

Doherty had state qualified to run in the 3200 meter last week but was unable to compete due to getting in a car accident on the way to Gainesville with his father and having to spend time at the hospital rather than the start line. Thankfully, he was healed up and recovered to race this weekend at Bolles.

St. Augustine freshman Lauren Voutour was the lone girls' entrant in the 5K and dropped 27 seconds from her cross country best of 20:14 to post a time of 19:37 on the track.