After running a few tenths off the Florida state class record for freshmen boys in the 800 meter run at the Florida Relays on April 1 -- with a performance of 1:54.79 -- Belen Jesuit's Joseph (Tiago) Socarras had been chasing that record.

The previous mark of 1:54.57 was last set by Darius Rainey of Hillsborough in 2019, and Socarras has been after it ever since, including another 1:54 performance at his regional meet.

Socarras got another opportunity in the post-season to break it at the Golden South Series #1 on Saturday at Dunbar High School in Fort Myers.

The race set up perfectly with IMG Academy's Vince Mwangi taking it out hard through the first 400 meters in 54 seconds. But it wasn't to pace Socarras, but rather his teammate Isaac Carney.

Miami Christopher Columbus junior Marc Dabby, the FHSA 4A Region 4 champion this season in the 800m with a 1:55 personal best, took over the lead as mile champion Mwangi peeled off from the track after pacing through a hot first 400 meters. 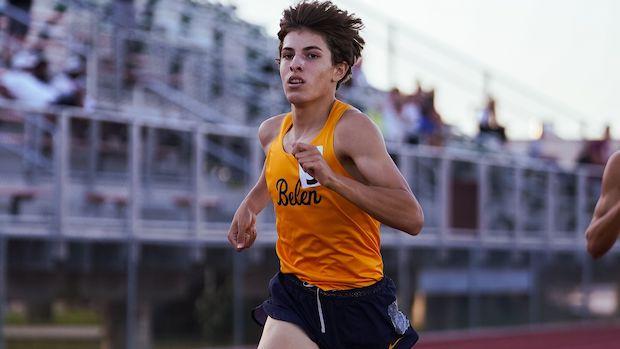 From there, it would be a battle of Miami middle-distance runners on the final lap -- Dabby, Socarras, and sophomore David Serra of Ransom Everglades, mind you, are all talented returnees back for next year.

Rolling off the final turn and heading into the final 100 meters, the trio was three-wide in a sprint to the finish.

But Serra, a FHSA Class 2A Region 4 champion at 800 meters with a 1:56.42 personal best, would celebrate a huge breakthrough performance and victory with a winning time of 1:52.35.

The time ranks as the fifth-fastest in the state of Florida. Not to be forgotten is the fact that Serra is only a sophomore, too.

Still, Socarras celebrated as if he won the race when he came across the line too.

When he crossed the line and saw the clock at 1:53, he knew he had certainly just shattered the Florida high school freshmen class state record, and moments later it was official: He did so in a time of 1:53.73.

Soccarras now ranks as the fastest freshman in the country currently at the distance, ahead of Stefon Dodoo from Pennsylvania at 1:53.84.

Dabby was also looking for a PR as well on Saturday, but unfortunately he hit the track before the finish line -- though he was able to get back up to finish third in 1:58.44.

Dabby, along with Serra and Socarras, are all ranked among the top 10 returnees for the 2023 outdoor season in Florida for the 800m. With Socarras running so fast as a ninth-grader, it will be exciting to track his progression over the next three years of high school. Could we see him become a sub-1:50 runner and potentially chase after more records?

If he wants the sophomore class state record next year, he will have to best the 1:50.92 performance by Godby's Joseph Franklin in 2006.

The senior record and overall state record is 1:47.79 by Andres Arroyo of Colonial from 2013.

Despite being only a freshman, Socarras time also breaks the Belen Jesuit school record in the 800 meter run previously held by current University of Florida track athlete Javi Vento at 1:53.95.