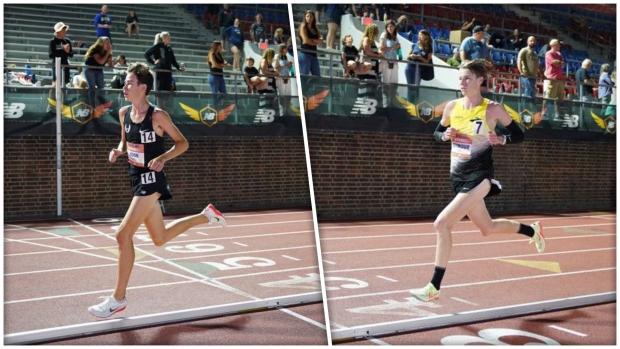 The 3A state champion in cross country, as well as the 3200-meter run, this past school year, Koon had a prior 5K personal best from cross country of 15:05 at the New World Fall Spectacular before dropping his time down to 14:40.21 to finish fifth for All-American honors.

The performance is the fourth-fastest 5K track time recorded in Florida high school history and actually ranks second fastest in Leon school history behind Matthew Mizereck at 14:37 from the 2010 New Balance Nationals. The state record is held by Andy Biladeu of Tampa Jesuit at 14:30.03 from the 2005 FSU Relays. Koon certainly has an opportunity to chase and break that record over the next two years of high school after already setting freshman and sophomore class records at the 3200 meters (as well as now 5K distance for sophomores).

Seymour, the 4A state champion this spring in 1600 meters and also a sub-9-minute performer at 3200 meters, showcased his great range to also dip under 15 minutes for the first time with an even bigger PR drop than Koon going from a 15:32 cross country best last fall to finishing 7th in a time of 14:53.74 on the track at New Balance Outdoor Nationals.

Seymour had primarily focused on the mile and 1600 this season including recording a handful of 4:11 efforts with the most recent being a 4:11.15 full mile performance at Golden South as a runner-up in Rheinhardt Harrison's sub-4-mile race.

Koon in 3A and Seymour in 4A should both be considered strong pre-season favorites to win state titles in the upcoming cross country season, especially after their 5K races this week on the track.