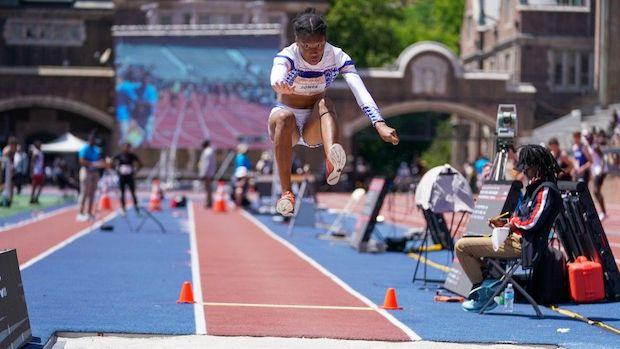 Florida highlights from the fourth day of the 2022 New Balance Outdoor Nationals in Philadelphia, Pennsylvania on Sunday, June 19th.

One of Florida's greatest track & field athletes of all-time in Miami Southridge senior Alyssa Jones, won yet another national title and with another leap over 21 feet in the long jump at 21'2.50" or 6.46 meters on Sunday in the championship girls long jump competition.

Jones took the lead with her first attempt being her best jump and was able to hold off Gianna Locci of New Jersey, who got very close to Jones on her fourth attempt with a leap of 6.44 meters or 21'2.50".

Jones nearly pulled out another national title on the day on anchor leg of the 4x100 meter relay for the Miami Southridge girls (competing as South Dade Express), who were fell just short behind Bullis School as the winners at 45.96 and Miami Southridge in second place at 46.04.

Jones also finished as a national runner-up on Sunday in the high jump as a slight disappointment in unable to clear beyond 5'8" or 1.73 meters despite having a 1.85 meters (6'0.75") personal best and had to settle for second place behind Katie Becker of Pennsylvania clearing a winning height of 1.76 meters or 5'9.25".

The Stanford signee won 3 national titles on the week in Philadelphia along with 3 national runner-up finishes in relays and individual events.

Cocoa (competing as E.O.T.O Elite) in third at 46.41 and Palm Beach Central (competing as Fast Lane Track Club) in fourth at 47.67 also joined the Southridge girls as All-Americans in the race with 3 of the top 4 finishing squads from Florida in the championship girls 4x100 meter relay finals.

Two sophomores from Florida earned All-American honors in the championship 200 meter dash finals with Palm Harbor University's Rachael Uvieghara placing fifth in the girls finals with a wind-legal 23.92 clocking, while Creekside's Christian Miller sped to a time of 21.07 to grab fourth place in the boys finals.

Brayden Seymour is going to start being called Mr. 4:11 as the Hagerty junior and 4A state champion at 1600 meters has run 4:11 numerous times this year whether at the mile or 1600 meter distance including a slight PR of 4:11.07 to finish 11th overall in the championship boys mile in a deep field assembled at Franklin Field.

He's been consistently fast, but certainly will be looking to break 4:10 next year as a senior. Impressively time as well in this third race in as many days as well.

Kyvon Tatham, a senior at Pembroke Pines Charter, leaped to All-American status in the championship boys long jump with a leap of 24'6.25" or 7.47 meters by the FHSAA 3A state champion.

Shaddai Carter of Christopher Columbus was a state champion this spring as a ninth grader and ended up earning a medal in Philadelphia this weekend with a leap of 45'0.25" or 13.72 meters for third place in the rising stars boys triple jump on Sunday.

The Creekside girls 4x400 squad was the final Florida athletes to earn All-American top 6 honors on the weekend finishing sixth in the championship girls 4x400 meter relay squad with a time of 3:54.88 for sixth place.