Below are the athletes selected to the All-flrunners.com Freshmen Girls Track & Field Team from the 2022 season. 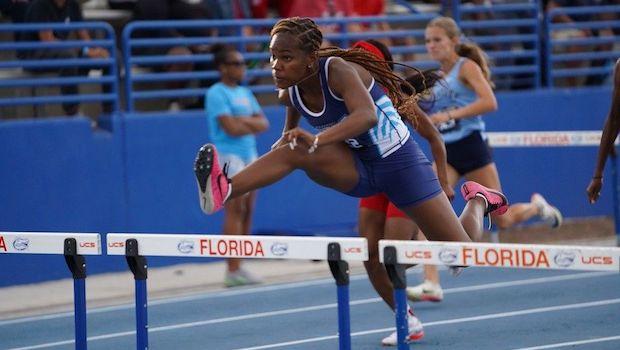 Aleesa Samuel was not only the best freshmen in the state of Florida in the 100 meter hurdles including breaking the freshmen state record in the event at 13.73 as the 2A state champion, but one of the nation's best ranked among the top 10 in the country for the majority of the season as well as finishing as a runner-up at the Brooks PR Invitational in the post-season against some of the nation's top athletes. That was her only loss of the season in the 100 meter hurdles including signature wins earlier in the season at the Louie Bing Invitational and FSU Relays.

Samuel also owned the fastest time among freshmen in Florida for the 100 meter dash at 11.74 as well as shared the top time in the 200 meter dash at 24.34 with her teammate Skye Jackson as an All-State top 3 finisher in both events at the state championships. Williams won state titles in the long jump and triple jump in 4A and nearly won another pair of state titles in the hurdles as a runner-up in both of those events to rack up 36 points individually at the FHSAA State Championships as one of the top individual point scorers of the week in Gainesville. Williams was a national runner-up at adidas Outdoor Nationals in the triple jump with the top mark among freshmen this year in the country with a wind legal leap of 39'10.75". The winner of the fan poll went to another star athlete at Somerset Academy Pembroke Pines in their top thrower and state runner-up this spring in the shot put in Lauren Kirby. Kirby was one of only two ninth graders to throw over 40 feet in the shot put this season as she finished just ahead of Christian Lett from West Florida Tech, who finished 3rd in the FHSAA 2A state competition with a personal best mark of 40'0.50" behind Kirby as the state runner-up in a PR performance of 40'2.25".