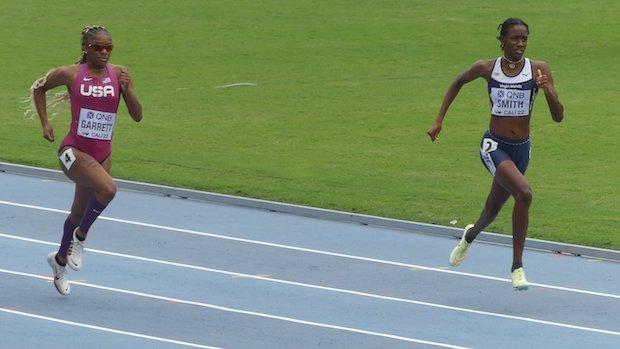 Michelle Smith, a rising junior at Montverde Academy, is competing this week in Cali, Colombia at the World Athletics U20 Championships representing the U.S. Virgin Islands. In competing in the event, which she will certainly be a dominant force in next year in Florida when the official championship event changes from the 300 to 400 meter hurdles, Smith has impressed thru the first two rounds at the U20 Champs. In the first round on Tuesday, Smith actually went head to head with the current US #1 high school ranked performer in the event in Akala Garrett (57.47 from USATF U20 Champs) from North Carolina and defeated her winning the preliminary round contest in 58.35 over Garrett at 58.40.

On Wednesday in the semifinals, Smith had to turn it up a notch to insure she made it into the finals later this week with a top 2 finish in her heat. She recorded a new personal best time of 57.83 to finish second and secure her spot in the final just behind Anje Nel of South Africa at 57.76.

Garrett was the top qualifier from the first heat lowering her US #1 time down to 57.28 and should set up for a very compelling fast heat with 6 of the 8 finalist including Smith running in the 57 second range in the second for little margin of error. The finals will be contested at 6:10 PM EST on Thursday.

Smith's performance in the prelims is also the 3rd fastest time recorded all-time in Florida high school history and she could potentially could chase the state record of 57.51 set by Miami Northwestern's D'Andreah Young from the 2017 New Balance Nationals. The FHSAA 2A state champion and state leader this spring in the 300 meter hurdles with a 41.56 best, Smith will certainly have a great opportunity to beat the 400 meter hurdles state record with two years of high school remaining but first is the chance to potentially medal with a top 3 finish on the World stage in the U20 Championships finals for the 400 meter hurdles tomorrow.  She will have a lane 7 draw right next to US #1 ranked and top qualifier Garrett.