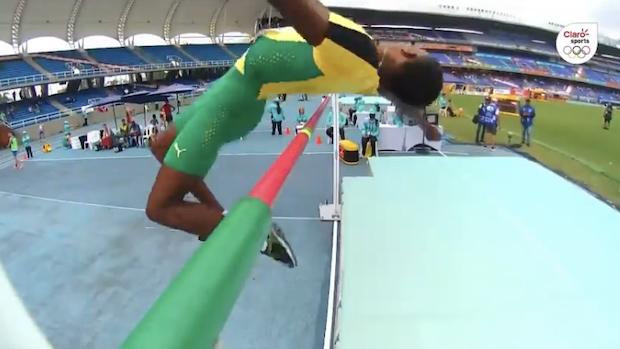 Brandon Pottinger, who just finished his senior season at Palmer Trinity School in Miami, is still competing this summer before he embarks at his college career at the University of Tennessee (initially committed to North Carolina A&T). Pottinger is competing for Team Jamaica this week at the World Athletics 20 Championships being contested in Cali, Colombia.

The state champion high jumper as well as a high school national champion this year at both the adidas Indoor Nationals in March and adidas Outdoor Nationals in June successfully cleared 2.08 meters of 6 feet and 10 inches in his qualifying group of the high jump to advance onto Friday's finals competition with 12 competitors remaining.

Pottinger cleared on the first attempt at his opening height of 2.04 meters before missing on his first try at 2.08 meters. Pottinger was able to cleanly get over the bar on his second try at 2.08 meters and certainly appears can try and challenge his 2.16 meters and 7'1" PR clearance from adidas Indoor Nationals. Team USA sent no male high jumpers to the World U20 Championships, so while Pottinger will be competing for Team Jamaica with is the birth country of both of his parents, he will certainly have a crowd rooting for him in America and especially locally here in the state of Florida.