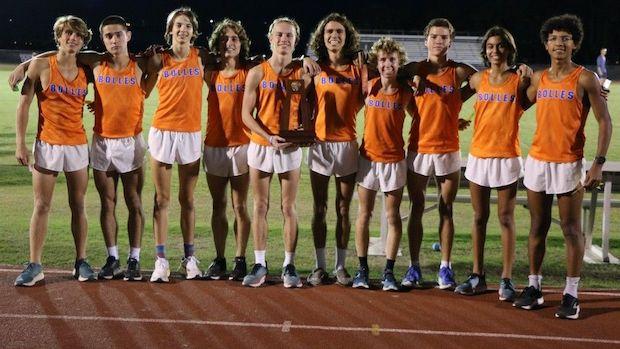 Below are the top 20 subjectively ranked boys cross country teams in the state of Florida heading into the 2022 cross country season.

1. Belen Jesuit (3A) - The Belen Jesuit boys might be one of the deeper teams in state history and will be gunning for a record 7th straight state title in 3A this fall. They already have a double digit group back who have broken 17 minutes for 5K  and should see their entire top 5 under 16 this fall at some point led by 3A state runner-up Joshua Ruiz (15:16 5K best). Their team has grand aspirations on the national level this year as well and are coming back soon from training for several weeks at altitude in Flagstaff, Arizona.

2. Bolles (2A) - Last year's 2A state champions will be heavy favorites without a major challenge to face them in their classification and led by one of the state's top individuals in Aidan Ryan (15:35 5K best). Behind Ryan is five others who went under 17 minutes for 5K last fall and several looking to join him in the sub 16 club this season. While they might not much competition to face in 2A this year to challenge, they will not be afraid to match up against top teams from the other classes and might have the best squad to challenge Belen Jesuit for the top ranking in the state.

3. Creekside (4A) - Losing last year's 4A state title on a sixth runner tiebreaker will be fuel for this team's fire, but will also under the direction of new head coach after Cash Tampa moved out of state this summer. Their lineup will include 7 runners already who have broken 17 minutes for 5K led by Mac Williams at 16:01. Last year's team thrived on pack running and keeping a tight spread, which will be their model for success as well in 2022.

4. Christopher Columbus (4A) - State champions two years ago in 4A, Columbus reloaded well last year finishing 4th to position themselves to challenge for a state title once again in 2022. Columbus will thrive and live off a pack that has only a 25 second spread between their top 5 returnees from 16:14 to 16:40. It might help them to see someone among their group emerge more and become a consistent sub 16 minute performer, but that remains to be seen.

5. Buchholz (4A) - There is a real chance of a program sweep for Buchholz in 4A this year as their boys team including the likes of Emerson Miller (15:27 5K), Mason Kawaja (16:30) and Riley Smith (17:01) have the talent returning to possibly join their girls as state champions in the fall. All had stellar track seasons and should give them one of the better front 3's in the state of Florida.

6. Fort Myers (3A) - Surprise state runners-up in 3A one year ago, it will no longer be a surprise if Fort Myers ends back on the podium again but seems like only one spot up for grabs since Belen Jesuit is such a prohibitive favor. Fort Myers has 4 runners back who went sub 17 last year and a pack of others chomping at the pits to join them as they should battle with Naples for bragging rights amongst being the best squad out of Southwest Florida this fall.

7. HB Plant (4A) - One of the best programs in the Tampa Bay area, Plant have a strong front runner in Albert Tawil-Brown (15:34 5K) and a pack of boys who are ready to move into the 16 minute range after strong track seasons and in particular running fast 3200 PR's with nearly 4 returnees under 10 minutes this spring. The team should also run inspired for long-time coach Mike Boza, who had a stroke during the track season and his helping mentor a new head coach to take over for him this season.

8. Nease (4A) - Life after Rheinhardt Harrison and somehow Nease has a better cross country team than all of 4 years that Rheinhardt ran for the squad? Yes. Nease will be in the mix for a top 2 podium finish in 4A with a deep lineup including 3 returnees who went sub 17 for 5K last year and also saw Matt Ryan go from 17:26 in the fall to step up individually in the spring and run a swift 3200 of 9:23. Sam Myers is their top returnee from XC with a 16:12 best.

9. Hagerty (4A) - Watch out for a quick rise up the rankings for Hagerty if they can find a solid enough fourth and fifth runner to go along with arguably one of the most if the not the top front 3 in the state in Brayden Seymour, Jonathan Leon, and Miguel Pantojas. Seymour and Leon were already a stout sub 16 minute 5K duo last year and Seymour is a likely state champion this fall in 4A after winning on the track at 1600 meters. Pantojas joined the squad for the track season and became one of only 10 Florida high schoolers to break 1:50 in the 800, but has the range to succeed at the 5K distance as well.

10. Indian Rocks Christian (1A) - The defending state champions from 1A may have lost their front runner Mateo Luna to graduation, but the young crew of runners behind him all developed substantially over the track season to make their 2022 squad even stronger for a chance of a title repeat. On the track, 5 of their returnees ran 3200 meter times ranging from 9:39 to 10:22 led by Aidan Griffin. They have the same teams to contend with in 1A, but also should fair even better this year in major invitationals against large schools.

11. Circle Christian (1A) - Last year's state runner-up in 1A, Circle Christian will certainly be gunning for a state title in 2022 with a top 7 of returnees all capable of going under 17:30 and possibly sub 17 this fall. Jack Dejesus is an individual contender in 1A with a 15:51 5K best, while the Will Neeld and Calvin Jagen both broke 10 minutes for 3200 meters this spring to give them plenty of talent returning including 6 of their 7 runners back from their 2021 state meet podium squad.

12. Niceville (4A) - Niceville returns 5 of their top 7 from a top 10 finishing squad (9th) in last year's 4A state race including 4 who broke 17 minutes for 5K last year in William Jetton (16:23), Gehrig Gesch (16:40), Alexander Buena (16:44), and Seamus Hodge (16:48) with majority running their best times in the post-season at Running-Lane. They will get battle tested in one of the state's toughest districts (4A District 1) and regions (4A Region 2) as always with plenty of opportunities to prove themselves as one of the best teams in the state and move up in the rankings.

13. Satellite (3A) - What Satellite might lack on perceived proven talent and times can easily made up based on history and coaching under Doug Butler. The challenge is a tall order for them in 2022 not only losing a great group of seniors from their 2021 state runner-up squad in 2A, but also moving up in classification to 3A with the state's top ranked squad in Belen Jesuit as well as another strong returning podium team in Fort Myers standing in their way. Andrew Mahorner (16:05 5K) and Carson Waggoner (16:19) will lead their charge and hope others are ready to step up in that varsity spotlight behind them.

14. Ponte Vedra (3A) - Potentially inspired by their girls winning their first ever state title one year ago in cross country, the Ponte Vedra boys are looking to improve upon their 7th place finish in last year's 3A state race and be one of the better squads in the Jacksonville area this fall. Led by Grant Doherty, who boasts PR's of 15:56 in the 5K and 9:21 in the 3200, Ponte Vedra will be a team to watch throughout the season.

15. Naples (3A) - Naples is a team that would not be surprised at season's end if they can beat out both Fort Myers and Satellite for that state runner-up spot in 3A. Naples was 5th in last year's state race and will rely on a pack effort with only 24 seconds separating their top 4 returnees from 16:46 to 17:10 to be successful this season starting this weekend when they race head to head with Fort Myers at the Dunbar Tiger Jamboree.

16. Bishop Kenny (2A) - Another squad that might not have a true front runner or star leading the way, but will rely on a collective effort of their top 5 runners running together as a group and picking off runners from other teams will be the Bishop Kenny boys as they appear early on as the best team in the 2A classification to join Bolles on the podium as a potential pre-season state runner-up pick. Bishop Kenny only has one runner who went sub 17 last season in Alejandro Vinas at 16:57, but have a swarm coming in right after him with 5K best times ranging from 17:06 to 17:32. They were 5th in the 2021 state race with a 44 second spread.

17. Sarasota (4A) - Alec Miller emerged as one of the state's top milers in Florida this past spring as the 4A state runner-up in 4:13 and will be looking to his progress to continue into the fall (16:43 5K best) to help lead Sarasota in making a jump from being 13th in the 4A state race last November to something much greater this fall. Will Hartvigsen was the team's top performer last fall with a 16:42 best and ran sub 9:40 for 3200 meters on the track, but Sarasota will need their other 3 varsity returnees with 5K bests in the 17 minute range to make another jump.

18. Sunlake (4A) - One of the top 10 ranked teams in the state for much of the 2021 season, Sunlake boys will look to overcome the graduation losses of Colby Robbins and Cason Meyer with some talented incoming freshmen and transfers as well as Alex Pena (15:40 5K) and Cade Culpepper (16:39 5K) steadying the ship up front as they move up from the 3A to 4A classification this fall.  Pena should be considered in the discussion among a handful of guys with a legitimate threat to winning the 4A individual title, while Culpepper should make the sophomore leap after running sub 10 for 3200 meters in the spring as well as a ninth grader.

19. Viera (4A) - Viera had a very special group of seniors that graduated this spring led by Michael Toppi and Robbie Naberhaus, but another talented duo is returning to step into that stardom role for them in Cameron Raney and Aeden Rendek. Raney (15:44 5K) is more longer distance geared with a 9:23 3200 best, while Rendek (16:01 5K) is definitely the middle distance specialist after running a 4:17 1600 on the track. Two keys for Viera to stay up and competitive with the top 10 ranked teams in the state will be sophomore Jack Girard returning to his top from saw thru halfway point of last season when he was running 16:29 for 5K as a freshman as well as filling the holes and gaps that exist currently in their #4 and #5 spots.

20. Oak Hall (1A) - After getting the short end of the stick and on the outside looking in as the third place team in a wide open 1A state race between themselves, the eventual champions Indian Rocks Christian, and the state runners-up Circle Christian, the Oak Hall boys have no plans of experience that same feeling in 2022. Caden Montini (15:46 5K) headlines their squad as a pre-season state title individual contender in 1A and a sub 4:20 miler, while Gabe Collante gives them a strong #2 as well with a 16:36 best. The question mark for them will be who the rest of their scoring five will come among.