The 2A boys race at the 2022 FHSAA State Cross Country Championships saw the Bolles boys win their program's 7th state team championship in cross country and second in a row led by their top runner and individual champion Aidan Ryan.

There was little doubt that the Bolles boys would repeat as champions without a real threat on the horizon to challenge them and more of a question of how large of margin would be their victory on race day.

The bigger question was if Aidan Ryan who came into the season as the pre-season favorite from not only being the state runner-up in last November's race, but also coming off a stellar track season in which he claimed state titles in both the 1600 and 3200 meter races, could hold off a pack of challengers who felt confident to race for the win and some vulnerability in Ryan who had to make up for time lost in the summer and the start of the season due to injury. 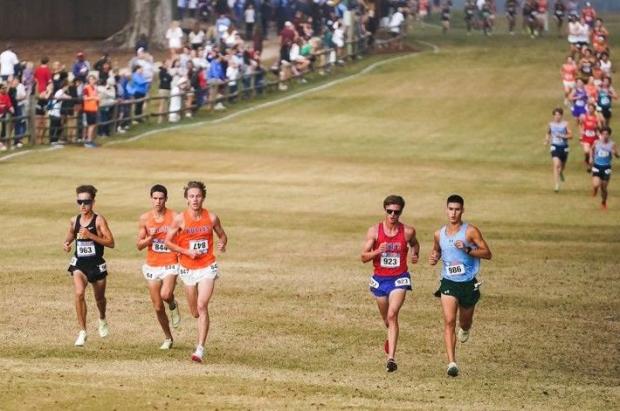 A pack of five emerged after the first loop and first ascent up the wall hill that included Ryan and teammate Christopher Joost with Montverde Academy senior Riley Novack, King's Academy senior Colton Lawson, and Ransom Everglades junior David Serra. After the lead group passed through the first mile in 4:51-4:52, the pace stayed honest in the second mile to split at 9:56-9:57.

When they crested over the wall for the final time, it was two middle distance studs with 800 meter bests of 1:53 or faster in Ryan and Serra in a battle with Novack trying to hang on in third place. Ryan would have the final gear shift to edge out Serra for a 15:25 state title victory for the University of Tennessee commit with the first year cross country runner in Serra finishing up an incredible fall of races as the state runner-up in 15:27.

Novack would clock a season best 5K time of 15:31 for third place behind both. Joost, who will take over as the lead runner for Bolles next year after Aidan Ryan graduates, gave his team 2 runners in the top 4 with his 15:47 fourth place effort.

Colton Lawson rounded out the top 5 in 15:52 for fifth place, while Kirin Karver of Berkeley Prep made it six runners in the race under 16 minutes at 15:56. Bolles put all of their scoring 5 runners inside the top 25 for their runaway team victory led by Ryan and Joost. Their senior teammate Andrew McGraw (12th, 16:21) joined them among the top 15 All-State individuals while sophomore Parker Adams (16th, 16:23) just missed making it four All-State finishers for Bolles.

Another tenth grader in Julian Barre (25th, 16:36) was their fifth and final team scorer at the state meet as their 16:06 team average ranked second fastest on the day behind only 3A state champions Belen Jesuit (15:55) and ahead of 4A state champions Creekside (16:13). The Calvary Christian boys failed to win their district and their region meets, but found a way to finish second in the state in the 2A race on Saturday. Seeded ninth in the pre-meet rankings as well as the virtual meet projections, Calvary Christian exceeded all expectations to come out on top of a large group of teams all with great hopes of being that state runner-up podium team in 2A.

The strength of their team all season along has been their top four, while their vulnerability has been in the back end of their varsity seven.  A good team showing at the state meet would require all of those top four runners to race well and just get an adequate race in the fifth spot.

A team that rivaled them locally all season long including defeating them at the district and regional meet in Berkeley Prep with a similar team makeup reliant on a strong top four and hoping someone to step up in the fifth had that worse care scenario on Saturday and ended up finishing a disappointing 15th in the field of 32 teams.

Calvary Christian instead went forwards and not backwards in the entire race as they were sixth in the team scoring at the mile mark, fourth at the  two mile mark before gaining another 39 places as a unit in the final 1.1 mile to earn their program's first state meet podium finish as the 2022 FHSAA 2A state runner-up squad.

Josh Davis led the squad with an All-State 13th place individual finish of 16:21, while fellow senior teammate Alex Valdez was only eight seconds behind in 20th place at 19:29. Brock Brown in 31st place at 16:53 and Chris Toomey in 33rd place at 16:57 gave Calvary Christian a stout front four, but then next would have to play the waiting game to see when their fifth and final scorer would come across the line.

Sophomore Brogan Aurich who had run over 19 minutes in 4 of his 6 races this season including a 19:36 performance at their regional meet last week, clocked an 17 second PR at the right time to finish 108th place as Calvary Christian's fifth finisher to secure their podium spot.

Seven of the next ten finishing teams behind Calvary Christian had a better fifth runner and several with a seventh runner displacer ahead of Calvary Christian's fifth finisher including third place Bishop Kenny having a 52 point swing advantage in the #5 spot, but Calvary Christian was so good through four runners that they ended up being 23 points ahead of Bishop Kenny and greater than the other top ranked teams in 2A coming into the competition.

Calvary Christian had four runners under 17 minutes, while Bishop Kenny just had two in Alejandro Vinas (15th, 16:22) and Juan Pablo Castillo-Zima (19th, 16:28). The 2A Region 4 champions Mater Lakes Academy finished fourth with 214 points with Bishop Verot (227 pts) in between them in fifth and the 2A Region 2 champions Lake Highland Prep (232 pts) in sixth place.