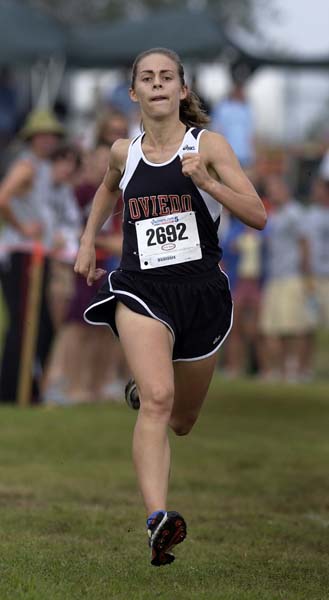 As a young runner who has literally traveled the world in pursuit of her goals, Oviedo senior Jenny Barringer, a member of the U.S. World Junior Cross-Country Team that traveled to Belgium last winter, knows a bit about tackling – and overcoming – adversity. Nevertheless, the third-place finisher at last fall's Footlocker National High-School Cross-Country Championship has faced some unusual challenges past few months, including jaw surgery in late June and Hurricane Charley and his evil cousins, which – starting in late August – dealt considerable damage to the senior's hometown and resulted in the cancellation of the first few meets in which Barringer was scheduled to compete.

Barringer, who missed over a month of running after her June 28 surgery, finally opened her season amid a modicum of local hubbub at the Flrunners.com Invitational in Tampa on September 24 with a narrow win over Nicole Schappert of Pope John Paul II. "Because of getting started late with my training, I'd been building base and had been running mileage by myself when others on my team were doing speed workouts," she says. "So I really had no idea how ready I'd be for the Flrunners.com meet. I told myself I'd be happy with a sub-18:00." Barringer ran 17:54.88 and outlasted Schappert in the stretch.

Naturally, the nationally regarded Barringer is looking at competitive goals that transcend Florida's boundaries, and with her coach has set up her training to maximize her chances of success at the Footlocker meet in San Diego on December 11 – an aim reinforced by the training she missed owing to medical and climatologic reasons. Yet with her high-school career winding toward a close, she evinces a distinct fondness for competing within the Sunshine State. "I've had opportunities to skip meets and Florida and compete elsewhere," she says, "but you only get to be in high school once."

The weekend after Flrunners.com, Barringer competed at the Great American Cross-Country Festival in Cary, N.C., an event that serves as an early-season showcase for the nation's finest. There, she placed 6th in 17:43. The following Thursday, Barringer easily won the Seminole Athletic Conference Championship. "Not winning at Great American wasn't a disappointment," she says. "In fact, experiences like those keep me focused on the big picture."

The grounded, academically focused Barringer allows that being a highly recruited senior has affected her outlook on the sport she loves – but not in a bad way. "It's exciting," she says. "I embrace the opportunities I've been given. I really do want to talk to everyone who calls, but if I did, I'd never finish everything I need to do." Barringer has already visited Colorado University and Notre Dame and has as many as three other visits planned. "In some ways the hurricanes helped me," she notes, "because with things like e-mail and power down for long periods of time, I couldn't physically set up or fit in the visits I'd need to make that kind of commitment."

Barringer is the kind of athlete who often takes off big chunks of time off her previous bests at a shot; last fall she whacked nearly 30 seconds off her previous 5K best with a sterling 16:55 at the Florida State Championship, and two weeks later, prepping for her Footlocker run, she ran 10:18 for 3200 meters at the Florida Milers Club All-Comers race. When asked if this tendency can be attributed to vagaries of focus, adrenalin, or training design, Barringer is pragmatic: "Really, it's more a matter of being – and staying – healthy," she says. "I do rise to a challenge and set the bar high for myself; running and competing is what I love to do. But that consistency has helped more than anything."

First on Barringer's plate is the 4A District I Championship this weekend, the Florida State Championship on November 6, the Footlocker South Regional on November 27, and the Footlocker Nationals on December 11. But spending time around collegiate and professional runners as a member of the U.S. World XC squad last winter definitely whetted Barringer's appetite for competing at the next level and beyond. "I almost felt as if that was an eight-day recruiting trip," she laughs. "I feel embarrassed now because I didn't realize the level of talent I'd be surrounded by, or how little I really knew about college running." On the other hand, her networking with coaches, college runners and pros created an immediate set of bonds she continues to relish and use as a resource in planning her future – a future running fans both within and outside of Florida, and perhaps even the U.S., look forward with great pleasure to following.