Daesha Rogers of American Heritage led the pack out to a strong 800 meters with Kacy Smith and all of the usual suspects coming in behind her. By the mile mark though, the race had really taken shape with Shelby Davidson and Kacy Smith leading Olivia Ortiz and Bridget Blake through white archway in 5:34. A chase pack including Bryce Seymor, Sarah Candiano, and Katy G Solis were hanging about five second back.

By the time they emerged from the back section, down Alligator Alley and toward the two mile mark the pack had strung out. Bridget Blake had taken over pushing the pace some where in the woods after the Minnihan Cutoff and was putting a pounding down on the others. With about 3/4 of a mile to go and passing by the mile mark again (going the other direction) she had gotten several seconds on Davidson and Ortiz who were fighting to stay up.

As they emerged again from the back stretch after Do or Die Bend the duo of chasers had closed the gap to Blake. With 800 to go Blake held on to a narrow three second lead. Ortiz made her final move around the last sharp turn, accelerating into the lead with 300 meters to go. She extended that lead as she cruised down the final straight with signature pony-tail flying and crowd cheering her to a six second 17:35 victory. Davidson tried to find the turn over to catch Blake (her admited weakness), but the gear wasn't quite there and Blake held on for a strong second place 17:41 to Davidson's 17:44.

For Ortiz it was a massive 40 second personal best, having run an 18:15 as her old PR last year at Pre-State (not counting the 18:12 on the track at flrunners.com Primetime in the spring).

Two others made their first trip under 18 as well... Freshman Sarah Candiano powered to a fourth place 17:51 and Bryce Seymour of Circle Christian kept the momenum she has been building all year to earn fifth in 17:58. Kacy Smith of Estero held on to run a very solid 18:09, which is her best time on the year.

Smith's sixh place performance, along with an 18:26 ninth place finish from Katy G Solis helped Estero to get their first victory at the flrunners.com Invitational. They beat out rival and defending champs Lakewood Ranch (who finished third with 123 points), and new depth-driven powerhouse John A. Ferguson (second place, 99 points) to finish with 70 points. Estero's team average was 18:53 going 4-7-9-18-32-(33)-(63) in the scoring. Their top six were under 20-minutes so that bodes well that the team as a whole is rounding into form nicely now to go along with their superb 1-2-3 of Smith, Solis, and Bethany Jenkins.

For its part Ferguson didn't start scoring until 20th place (16th place for team scoring), but it was all done scoring by 30th place (25th by team scoring)... now that is what we call some pack power. Helping them even more #7 was over in 37th place (31 by team scoring) giving them some much needed pushers against Lakewood Ranch. The 1-5 range was just 33 seconds (19:01 to 19:34)... wow! They really came out of no where if you were only watching the front. 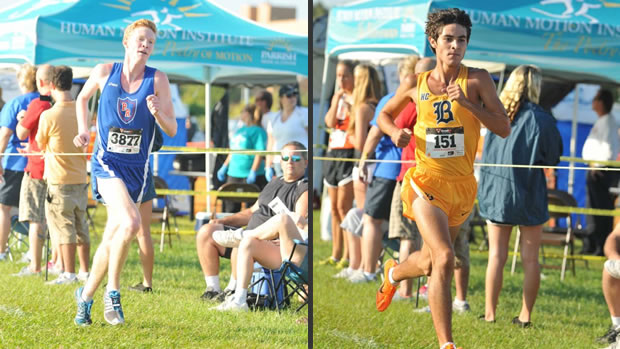 Ryan White of Park Vista took the masive pack through the first 800 with Charles Anderson of John I. Leonard, Elliote Clemente of Belen Jesuit, Aaron Rojas of Estero, and then EVERYBODY coming around the horseshoe for the first time. By the time they reached Kramer Speedway across the lake, much had changed. Clemente pushed the pace there and took Carlos Miranda of Palmetto Ridge and Arroyo through the mile mark in 4:47. Josh Brickell of Peachtree Ridge Georgia hung back just a bit off pace, but well within striking distance.

After they passed Byrne's Bank and crossed the Minnihan Cutoff bridge, Brickell took over. By the two mile mark he had a four second gap over Clemente with Miranda and Arroyo fighting to keep hold another three seconds behind Clemente.

Brickell opened his stride and surged harder to gap Clemente by 7 seconds with 800 to go and then 12 seconds by the finish. Brickell won in a time of 15:02--fifth fastest ever on this course--with Clemente in 15:14. Miranda held on for a marvelous 15:22 with Arroyo holding off Billy Anguish at the line, both at 15:31.

Members of the crowd were amazed when they realized all finishers were done by the time the clock struck 20 minutes. Fourteen broke 16 minutes (down from 24 last year), sixty-two were better than 17 minutes, and 132 crossed before 18. 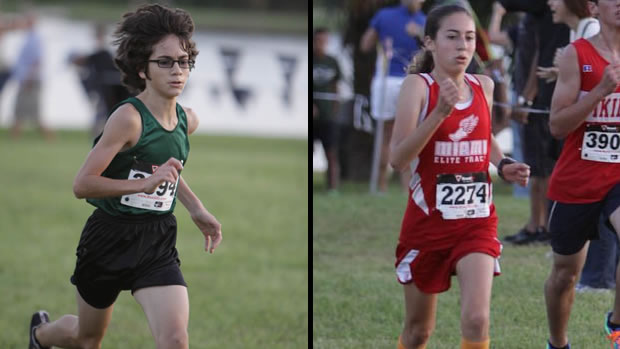 Brandon Marquez of Avalon Middle School in Orlando clobbered the old meet and course record set in 2009 by Kenny Castro (now of Columbus) by running a 10:30.15 to dominate the field. His nearest competitor was Nic Jacobsen, who is the #1 varsity runner on the high school level for St. Andrews, who ran a 11:04. Marquez finished second in the 3000 at the Middle School State Meet last spring and fifth in the cross country state meet in 2010.

For the girls, Alexa Cruz (Miami Elite) also got under the old meet/course record that was set by Victoria Villarnovo (now at Lourdes).  Cruz ran an 11:56 over the 12:07 of Nicole Morse (Eye of the Tiger), the next female competitor. Mackenzie Wilson (Episcopal) and Savanna Gornisiewicz (Pine Crest) battle it out on the left. Thomas Christenberry (Plant) heading down the home stretch for the win. Photos by Jeff Adams