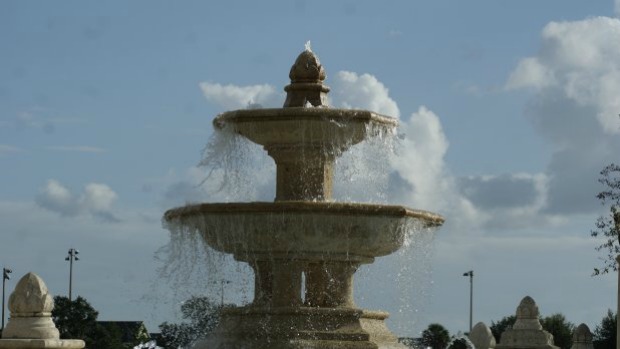 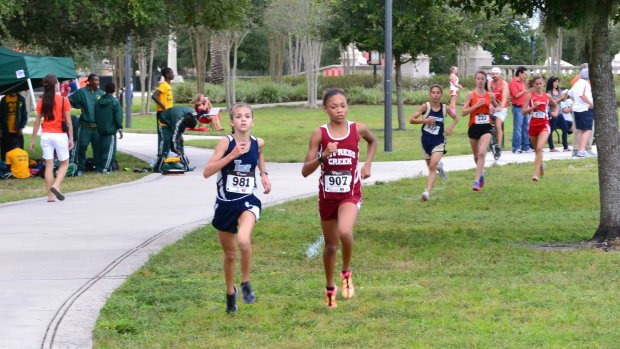 In the girls varsity race the frontrunners were very familiar with one another. Cypress Creek's Kaley Schmick, Lake Nona's Adair Lyden, and University's Autumn Barlett had all faced off against each other several time throughout the season, but as recently as last week on the same Blue Jacket Park course for the Metro Freshman/Sophomore Championships. The only difference this race is that Emily Headley would not be competing since she is in the Metro West conference. That left the title up for grabs between the three. From the gun it was a two person battle between two tiny runners, Schmick and Lyden, going stride for stride. Schmick admitted after the race she knew the competition, but was a little surprised at the fight the Lake Nona freshman put up. Schmick made her move at about the mile and a half mark and into a new personal best time of 18:49.50. It was her first win of the season and her best time of the year by over twenty seconds. Lyden finished in second one second behind her time at the freshman/sophomore meet in 19:14.60. Bartlett rounded out the top three with a time of 19:41.10. Colonial placed all five of its runners in the top sixteen to edge out host Winter Park 54-56 for the team title. Timber Creek was third with 100 points. 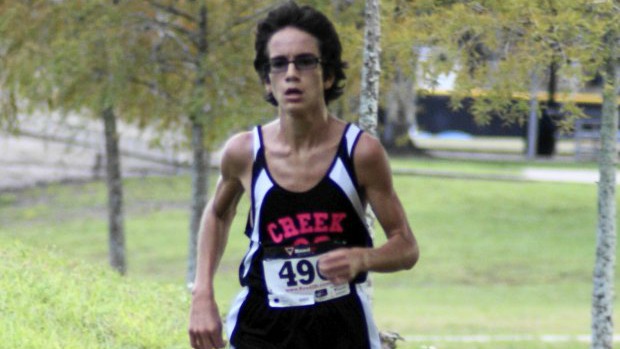 The boys race featured a much anticipated match up between the boys of Colonial and freshman standout Brandon Marquez of Timber Creek. Colonial's number one runner, Andres Arroyo, who is nationally ranked, was in attendance, but not running. Arroyo opted to cruise the course on two wheels rather than two feet riding his bike around prior to the race. Marquez, John Lindsey of Winter Park, and a foursome of Grenadiers, came through the mile mark tightly bunched together. Marquez, who has been hampered with injury this season didn't let them bother him as he turned on the afterburners the second half of the race. He told me after the race he wanted to be talked about with some of the top guys in 4A and although he might not be ready to dethrone Arroyo, he proved he is ready to hang with the big boys. The Wolves freshman crossed the line in a new personal best of 15:38.90. Keep in mind their was a wind and Winter Park coach Dennis Kozub claims the course runs 20 seconds slow. Winter Park's John Lindsey got away from the Colonial pack to finish second in sub sixteen minutes, 15:55.60. Colonial went 3-4-5 with John Profitt, Caleb Licht, and Raul Ramirez as the Grenadiers tallied 40 points for the easy team win. Timber Creek edged out Boone 71-78 for second place.

* Special shoutout to Anthony Coscia of Boone who broke the seventeen minute mark for the first time in his running career and was so excited afterwards he decided to do a victory dance for us!