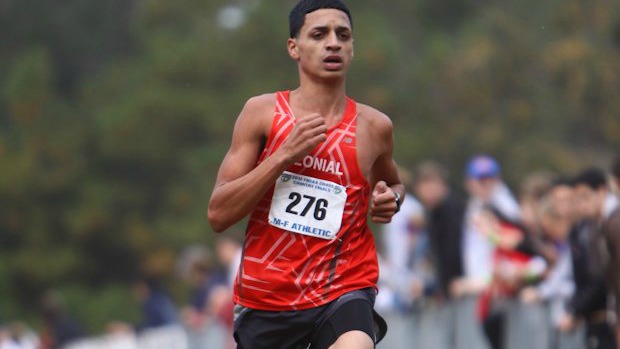 We conclude our 2012 cross country coverage by honoring the top male harriers of the season. Congratulations to our 2012 All Flrunners Boys Cross Country Team.

Andres Arroyo - Runner of the Year - Colonial - Senior - Arroyo ran in nine regular season meets and won seven of them. His lone losses came to nationally ranked Josh Brickell of Georgia at the Bale N Trail Cross Country meet where he finished second, and at the Great American Cross Country Festival where he finished 23rd. He won the FSU Invitational/Pre-State by 13 seconds over Tyler Bennett and bested a field that included everyone listed on the first team. He then went onto claim district and regional championships before picking up his second straight 4A state championship. The win also catapulted Colonial to the top of the team standings for the second time in two years. His 15:12.61 set at the Region of Death, 4A Region 1, was the second fastest time in Florida for 2012. He is undecided in the college recruiting processm but is garnering attention from the top college programs in the country.

Tyler Bennett - Fort Myers - Junior - Bennett was a leader of the Fort Myers Green Wave in 2012 hovering in the mid 15's throughout the season and finishing in the top five of every meet entered. He won the Barron Collier Invite, North Port Invitational, Manasota Track Club Invitational, conference championship, and district championships. He finished fifth at the flrunners.com Invitational Race of Champions, second at the FSU Invitational/Pre-State,  third at regionals, and 3A state runner-up in arguably one of the hardest classifications. That helped Fort Myers finish third in the team standings. Bennett returns in 2013 for his senior year and will be one of the top contenders along with returning state champion Thomas Howell and his Niceville teammate Nick Morken.

Ace Brown  - Fort Myers - Senior - Brown was an integral part of Fort Myers third place team at the 3A Cross Country Finals. He finished in the top six in every race enter in 2012 including two sixth place finishes at the flrunners.com Invitational Boys Race of Champions and the FSU Invitational/Pre-State. He placed fifth at state and won the FACA Senior All-Star Meet the following week. Not ready to finish his high school career, Brown headed to North Carolina to compete in the Foot Locker South Regional. With many of the top runners from across the state as well as the southeast participating, he proved he could hang with the rest of the group. He was the first Floridian to cross the line and the 19th runner overall, coming close to a top ten finish and trip to San Diego. Brown is in the process of finishing up his college visits and expect to decide by the middle to end of January.

Thomas Howell - NIceville - Junior - Howell dominated North Florida competition for the duration of the season. He didn't disappoint when the Panhandle star had to trips to Titusville and Tallahassee for the flrunners.com Invitational and the FSU Invitational/Pre-State where he finished 7th and 4th respectively. Howell had seven sub 16 minute performances and went onto win district, regional, and state championships. Howell's 15:19.64 was the second fastest time of any runner at state and a new personal best. It was more t han 12 seconds faster than any runner in the field. The scary news is that he was just, "having fun" that day and not taking it too serious. Even scarier is the fact that he will back in 2013 to defend his title and will definitely be one of the favorites.

Avery Lopez - Belen Jesuit - Senior - Lopez  has been one of the top runners on one of the top programs in Florida, the southeast, and nationally over the past four years. During his time Belen Jesuit has won four state titles and this year he guided them to that fourth. A leader on and off the course, Lopez set the tone for the season early. He bested a very competitive field at the Mt. Dew Invitational running his first sub 16 minute race of the season then won the Fleet Feet Invitational. He finished second in the fllrunners.com Boys Race of Champions with a personal best time of 15:17.60, the fourth fastest regardless of class during the season. He placed fifth at the FSU Invitational and fourth place at the 3A state championship. Lopez has yet to make a college decision.

Nicholas Morken - Niceville - Junior - Morken teamed up with Howell to form a potent 1-2 punch. If it wasn't Howell winning a race Morken would step in his place, and if Howell wasn't on his team, Morken would have won a lot more. Still the rivalry between the two friends makes them even better in the end. Morken didn't finish any lower than fourth in any race.  That took place at the flrunners.com Invitational Boys Race of Champions where he actually finished higher than Howell. He earned runner up finishes at the Panhandle Championships, districts, and regionals, before crossing the line in third. He was consistenly under 16 minutes and near mid 15's as the season progressed. Watch for him in 2013 to drop ten to twenty seconds off those times.

Daniel Salas - Trinity Prep - Senior -  Salas started off his season on a very impressive note winning the Trinity Prep Invitational, the Jim Ryun Invitational, and the Embry Riddle Asics Cross Country Meet. Then against a top field at the flrunners.com Invitational Salas came in third place with a new personal best of 15:17.60, the fourth fastest time regardless of class. He went onto take district and regional crowns before finishing runner-up at the 1A Cross Counrty Finals for the second straight year. In 2009 and 2010 he finished 8th and 6th respectively as Trinity Prep won the team championship. Salas has committed to Dartmouth College in Hanover, New Hampshire.