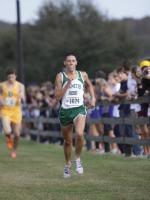 3A Track & Field Leaderboard...
The postseason is right around the corner for the outdoor track and field season. We know everyone loves some rankings. We decided to break it down by class and see who the leaders in each event were....