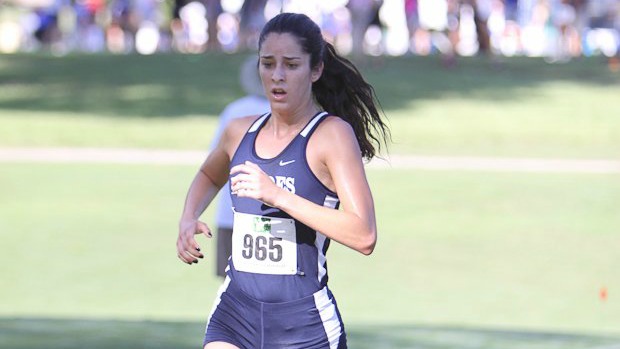 "Exciting, inspiring, and a little bit nerve-racking." That is how Our Lady of Lourdes Academy senior Courtney FIlliben described the recruiting process. Filliben recently ended her recruitment with a commitment to the University of Southern Mississippi.  She took an official visit there as well as Samford University in Homewood, Alabama and says visiting the two schools was an experience she won't forget.

"I took two official visits to Southern Mississippi and Samford. Seeing the campuses in person blew away all the photos on the schools’ websites. I got the chance to really get a feel for each of the schools and had no problem seeing myself in either one. Even better than that was meeting and hanging out with the girls on both teams. The fact that I fell in love with both schools and really had great respect for both coaches made the whole decision process extremely difficult."

After much thought, it was the Golden Eagles of Southern Miss that soared to the top of her list. The opportunities for growth as a student and as an athlete peaked Filliben's interest. She says overall, the Hattiesburg school had everything she was looking for in a University.

"It’s a nationally ranked division 1 program that also offers a full range of other major sports. I felt that I fit in well with the girls on the team and other students on campus, and got along with the coach. Another plus for me is the fact that my older brother is only a few hours away playing baseball for a D1 program in Alabama."

As a junior, Filliben finished 19th at the Cross Country State Finals. She followed that up with a fifth place showing the 800 and fourth place finish in the 1600 meters at the FHSAA Outdoor State Finals. The 2012 cross country season wasn't as kind for the senior. After finishing second at the district meet, a stress fracture derailed her final year from going any further.  She says it was important to get the decision out of the way early so she could put 2012 behind her and focus on 2013.
"This was huge for me. I made my decision on Christmas Eve and woke up Christmas morning completely relieved. Now, I have time to focus solely on my school work and on getting back into the swing of things after my stress fracture this past fall. Making my decision has only gotten me more eager to start training again and racing in track."

Once her final track and field season is complete she will embark on her new adventure. Fellow Florida runner Kristin Zarella of Lakewood Ranch has also made her pledge to Southern Miss. She is just one member of a team that Filliben says she is excited to be a part of, a real dream come true.

"I’m looking forward to getting a chance to put on the uniform for the first and competing with my future team. I plan to work hard so that I will be able to contribute to the team’s success. Since I was younger, I have always dreamed of competing on the Division 1 collegiate level and going to medical school. It all starts here."


Have you committed to a college or university? Not on our signings list? Let us know about it. Email me: TGrasley@milesplit.com.