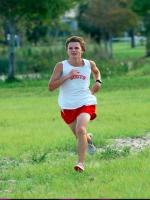 Salute To Seniors: Nic Jacobsen - Saint Andrew's School
The 2015-2016 school year has provided some great highlights in both cross country and track across the Sunshine State. In the coming weeks many of our seniors will head out to start their college car...

2A Top 100 Returning XC Boys - Lacy Looks For Second St...
Take a look at the top 100 fastest returning boys cross country runners for the 2A classification in the state of Florida. Note: This list does account for incoming freshman and transfers....

Guess Who's Back: 2A Boys Event By Event Top Ten Returners
Hallandale senior Antwuan Musgrove is ranked number one in 2A in both the 110m hurdles and 300m hurdles heading into the 2015 track and field season. Take a look at the top ten returners in each event...

In His Own Words: Nic Jacobsen - Finding A Rhythm...
Hey flrunners, sorry it has been a while since my last post, but that is not to say that little has been going on. The middle portion of my season has been a little rocky to say the least. Heading int...

In His Own Words: Nic Jacobsen - Leap Of Faith...
Hey Flrunners! It&#39;s been about three weeks since my last update and I have had such a hectic schedule lately that it has felt more like three months. Since the beginning of this month, I have defi...

Cobra Country XC Invitational Featured Photo Album...
Toni Gariano was on-site for flrunners.com at the Cobra County XC Invitational at South County Regional Park in Boca Raton. Check out nearly 600 photos from all the action including this one of winner...

In His Own Words: Nic Jacobsen - Race Week...
I can’t believe that the season has truly started and results from pre/early season races are starting to pile in already! The past two weeks since I have started school have been very up and down f...