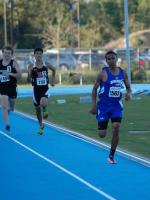 4A Top 100 Fastest Returning XC Boys: Joshua Jacques Is...
Lyman's Joshua Jacques was the 4A Cross Country Finals champion in 2014 and helped guide the Greyhounds to the team title. He's the top returner in 2015 and looking to go back to back! Take a look at ...