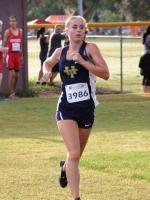 Scouting Report: Holy Trinity Girls...
The Holy Trinity girls are no stranger to the 1A podium and were the runner-ups in 2016. Giana Gayles returns as the 100mH and long jump champion while Samantha Folio gives the Tigers much needed poin...

Holy Trinity Senior Samantha Selects Georgia Tech...
Samantha Folio has been a fixture of 1A power Holy Trinity since she was 43rd as a 7th grader in 2011. The next four years she finished in the top 25, and ended her senior cross country season as the...

19 Senior Girls Under 19 Minutes At State - Good Friend...
Good friends Kayla Easterly and Kristlin Gear finished third and fourth in the girls 3A race. Their times of 18:14.51 and 18:23.01 rank as the third and fifth best times by any senior at the state mee...