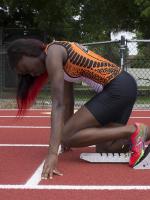 5 Things I learned From Sanya Richard Ross...
This week, Sanya Richards-Ross, the reigning 400m Olympic Gold medalist, made it known that this season will be her final lap around the world. Her retirement announcement was heard all around the wor...

Team Florida Looks For Continued Success At Great South...
Florida athletes have had success in recent years at the Great Southwest Classic in New Mexico and 2015 looks to be no different as the Sunshine State roster is loaded and poised to bring home more go...

Inside The Decision: Denise Spann - Becoming A Michigan...
With the second National Signing Day period days away, Boyd Anderson senior Denise Spann gives us an inside look at her decision to run for Michigan State University....

In Her Own Words: Denise Spann - In The Blink Of An Eye
Track season is literally a few weeks away and I honestly can't believe that it's my senior season. There have been many days where I didn't think I'd make it to where I am now. If you were going to t...

Greene Climbs Up Florida All-Time HJ Ranks With 6'0 Cle...
Nicole Greene climbed up the HJ rankings becoming only the fourth Florida girl to eclipse 6'0". JAC teammate David Bell made his mark on the pole vault rankings, while members of the Fast Lane Track C...