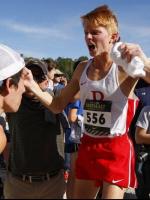 Final Rankings: Boys 3,200m: Noah Perkins 17s PR At FSU...
Seffner Christian senior and UNF signee Noah Perkins ran a 17 second PR at the FSU Relays in the 3,200m with a state leading 9:08.54. Perkins time is nearly a second and a half faster than Adam Bradtm...

Behind The Lens: Floridians At NXN...
The amazing Nike Headquarters and scenic Glendoveer Golf Course provided for some spectacular images throughout the weekend of Nike Cross Nationals. Take a look at some of our favorite photos of our ...