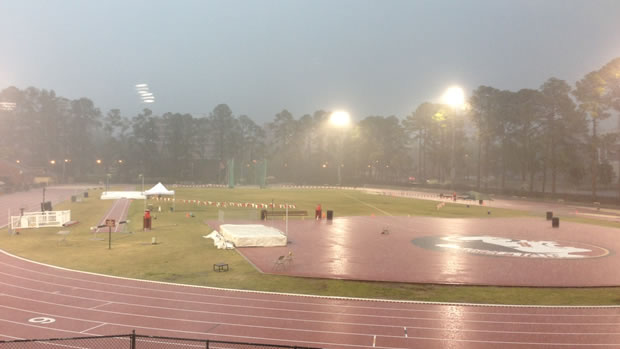 After a successful day one at the FSU Relays, as soon as day two started so did the rain. And boy did it come down!

The morning session was delayed until around noon, when the storms were projected to ligthen. After the two and a half our delay, the skies let up long enough to get a few events off.  After the restart, the meet went into a rolling schedule and got through about five events on the track before things turned ugly again. After waiting another hour, the weather man only predicted gloom and doom. The remainder of the meet was called around 3:30PM.

Despite the ugliness in the weather, our team of Todd Gralsey, Randy Settle, Joe Mizereck, and Jeff Surran got great coverage over the two days of the meet!

The jumps weren't nearly as high as the 5-8 ancipated going in, but with a slick runway Faith Woodard of Freedom Tampa did well to clear the bar at 5-4.25. She was the only one to clear that height and got the win over the solid, wet competition. She has commited to Georgetown on a basketball scholarship. The senior from Pine Forest cleared 11 feet to beat out freshman Margeret Ollinger of Alabama's 10-6.

What a year so far for Austin Droogsma! He has been the dominant all-around force in both throws events this season. The senior from Gulf Breeze, threw the soggy discus 176 feet to beat out Jobi Finau of Pine Forest by almost seven feet.

After winning the long jump the day before, McQueen made it a clean sweep with a 39-9.75 jump on Saturday to win the triple as well. She did it with ease, winning by over three and a half feet.

Folston,  Hill and Williams Race Up in the College Division

Deanna Hill and Kendall Williams decided to forgo the high school competition this weekend; they raced unattached against the collegiate athletes.

Stanton Prep star Kendal Williams finished a bit higher. He took second out of heat one and third overall with a 21.26 running into a -0.6 wind. Johna Whitaker of Pine Forest completed the double, winning the 300 meter hurdles gold on Saturday to go with her high hurdles win the day before. She outran Mikayla Barber of Wharton 43.39 to 44.91.

Juniors Bailey Sullivan and Anna Montgomery of Plant went 1-2 in the consolation round of the 3200. Their gapped the field by over ten seconds with times of 11:33.47 and 11:37.32, both season bests.

Holy Trinity senior Cole Oliver beat out Alec Clark of West Florida Tech, with a time of 9:43.13 to 9:47.53 out of heat one. And it was a good thing they didn't let up, heat two featured Joseph Gordon  Pace of Trinity Prep, Joseph Janson of PK Yonge and Oliver's teammate Andrew Cacciatore, who all went under 9:50 as well.

Bishop Kenny senior Mary Kate Thyfault sat back in fifth place and waited. She let Alabama sophmore Ebie Douglas do all the work up front, and she drafted off of the back of the lead pack. At the bell Douglas surged and seemingly dropped the pack, but they started to come back to her around the final curve. Then on the homestretch, Mary Kate opened up a big kick and mowed her down over the last 20 meters to win in 5:19.60 to 5:20.56. Three others were under 5:25 including Sarah Carrion of Lakey Mary and Mary Slager and Bethany Jenkins of Estero. Tyler Bennett of Ft. Myers set the intial pace, leading for the first 800. The lead changed multiple times thereafter with Michael Magoulas of Belen Jesuit and a host of others taking it at one time or another. The final lap was kind of a free for all with a big pack, switching it up and seeing who could find the biggest gear. It was junior Aaron Jane of Mosely who took over with a big kick on the homestretch to win in 4:25.64 over Zachary Perry of Bishop Kenny in 4:26.59. Seven in all broke 4:30; early leader Bennett had to settle for ninth in 4:30.58.

Winter Park showed took over the lead with a smooth hand off on the third leg and nice solid splits to win in 1:43.32.

It came a bit down to the wire, but Pine Forest fought off a strong last leg from First Academy to hold on to the win 1:29.73 to 1:30.12. Pine Forest had a great third leg by Trebian Suggs to punch them into the lead.

In the last event of the day before the meet was called, Michael Taylor of Lake Mary Prep beat out Justin Cromartie of Chiles 40.47 to 40.77.