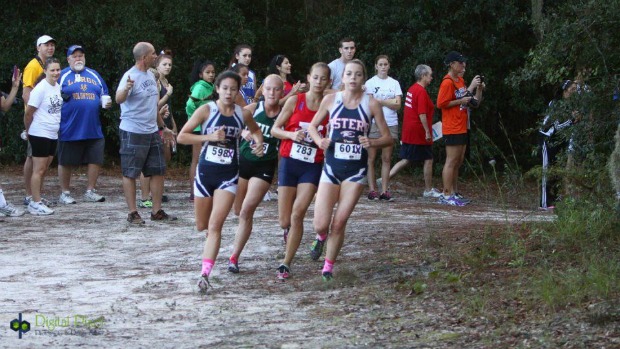 The story line coming in was the Estero Wildcat girls sending shockwaves through the cross-country community. After dominant performances at the Flrunners.com Invitational in Titusville a week ago and at the North Port Invitational a week before that, the Estero girls were not just favored to win, they were favored to sweep the top four spots or at least take four of the top five spots. The sweep and the four of five didn’t happen but the Wildcats were dominant with senior Araceli Leon taking first in 18:50, senior Katie Slater in fourth with 19:15, sophomore Daley Cline in sixth with 19:41, and junior Megan Slater was ninth in 20:09. Even sophomore Elise Tutton (20:15) and senior Bethany Jenkins (20:18) claimed 11th and 12th place. The Wildcats didn’t even have to use Jenkins’ score. When your sixth runner places 12th in a top-notch meet with 33 teams, that says something. It says something like you score 31 points in a meet that is more competitive than anything you will see until states. It says, you dominated.

The only chance for other schools to press Estero’s team was for the bus to break down. The Wildcats solved that by driving up the night before and booking a hotel. Traveling to meets is not unfamiliar territory for Leon. The senior has been on four different cross-country teams in her four years of high school but has found a home in Estero.

“We go in together, we come out together,” Leon said.

“The three Estero girls were out in front most of the race but we started picking them off toward the end,” Carpenter said. “Then it was just me and her (Grippo), just decking it out.”

Carpenter finished in 19:04. It was fourteen seconds behind Leon but just two seconds ahead of Grippo. Carpenter said it was one of her best races even if it wasn’t her best time and thanked her training partner Elizabeth Mulford who finished fifth in 19:21. 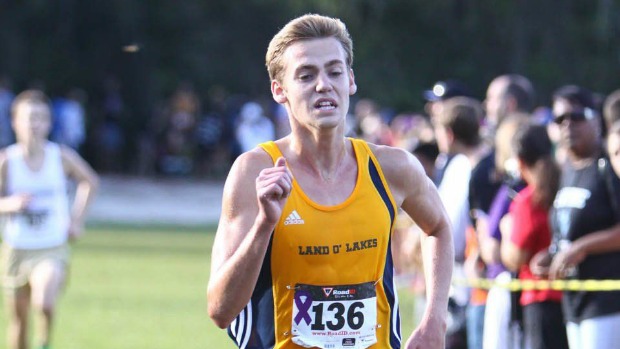 The story coming in on the boys side was Land O’Lakes coach Kris Keppel and his boy runners. Keppel was recently diagnosed with pancreatic cancer and goes into chemotherapy next week. This 17th Gator Invitational had special meaning for Keppel and for his runners.

“To win this race is special because it’s his (Keppel’s) race,” Gator senior Travis Nichols said. “He (Keppel) has put in so much time and given so much.”

Nichols was able to deliver for his coach, edging out Plant junior Jack Guyton in 16:05 to take first place. The boys Varisty race was a nail-biter. Normally, the field spreads out after the first mile and it’s clear who is going to win by the second. The 2013 Gator Invitational boys Varsity race had a front-runner pack that held together most of the race. The Gator platoon of Nichols, seniors Tyler Stahl and Jake Poore along with Guyton and Estero junior Dillion Vallette formed a pack and pace that saw all five finished not only under 17 minutes but under 16:40.

Nichols, Guyton and Stahl separated from the pack as they approached two miles and Nichols hit another gear as he approached the last 600 meters. Guyton hung on him as the two runners separated from Stahl and it was Nichols that kicked it to a first place finish.

“Staying in that front pack really helped,” Guyton said. “I was hoping to break 16 (seconds) but I’m happy (with the result).”

Guyton’s second place time of 16:07 was not far off at all from cracking 16 seconds.

The boys team from McKeel Academy actually won the boys team title, even though they did not place a runner in the top six. Junior Casey Brady led the way with his seventh-place finish in 16:52. Wildcat runners Leif Henrikson, Dundan Lippincott and Dustin White secured the 10th, 11th and 12th spots, respectively and helped vault their team to a victory with 68 points to Estero’s 92. Land O’Lakes, despite finishing first, third and fourth individually, had to settle for a third-place team finish with 97 points.

“This team has the best chance (to place at states) than any year that I’ve been here,” Stahl said. “It makes you feel good and have a positive attitude about it.”

Stahl settled for third place in 16:19 but is coming off a scorching 15:49 at the North Port Invitational a couple weeks ago. Senior teammate Jake Poore grabbed the fourth spot in 16:30.

“Jake had a phenomenal last mile,” Nichols said. “He usually starts out too fast and dies but he had a great finish to this race.”

Rounding out the Gator senior quartet was Steven Barnabei who ran a 17:51, finishing 41st. Barnabei had his own bout with cancer and is currently in remission. Barnabei still sports the half-shaven head style from where the brain tumor was removed and Barnabei is also still getting back up to speed with his times after missing much of last year. Barnabei could see the biggest drop in his times between now and states, where the Gators are likely to qualify. Gator sophomore Austin Dotson finished 48th in 18:07 to round out the Land O’Lakes effort.