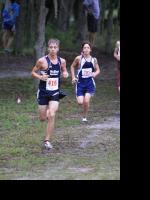 1A District Previews and Virtual Meets...
Distirct-by-district preview for the 1A meets that begin on Monday....

Gardner, Brookover Shine At Seffner Christian Last Chan...
It was a beautiful Thursday afternoon at the Sydney Dover Trails in Brandon for the Seffner Christian Invitational. Nearly a dozen teams made the trip to the course which they ran backwards for this r...