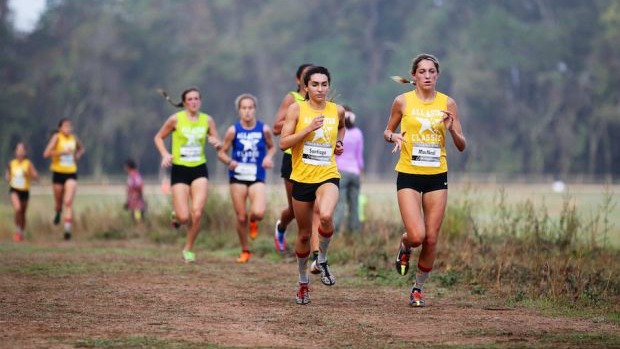 The early morning fog cleared just in time for the start of the girls race at 9:00am. As the bright colored racers all merged together in the first couple hundred meters, the South girls gravitated to the front of the pack pretty quickly in the opening straightaway. At a mile and a quarter mark there was a group of seven that had separated themselves from the rest of the pack; four girls from the South, two girls from the East, one for the North. The group consisted of Katherine MacNeal, Emily Hernandez, Luly Brea, and Katrina Santiago (South); Charlotte Stephens and Claire Castillo (East); and Madison Harris (North). By the time they came out of the trail and just over the first hill, the pack had strung out a little. Santiago and MacNeal had taken the lead just past the halfway mark (as pictured above), with Emily Harding (West), and Morgan Hull (South) making their way into the back half of the first bunch. By two and a half miles in, Santiago opened up a sizeable lead of about forty meters over MacNeal who was about thirty meters ahead of the 3rd and 4th place girls, Harris and Castillo respectively. Coming down the final straightaway, Santiago ran away from MacNeal to win in a time of 18:38.35 marking back to back FACA wins by a South girl individually; Ellyn Snider of Spanish River won for the South in 2012. Coming into the final straightaway, Harris had put a five meter lead on MacNeal, but a strong kick made it a tight battle through the final meters. Harris was unable to hold off MacNeal who sprinted past her right at the finish. Her attempt to dive at the line for a runner-up finish came up just short by .15 seconds as MacNeal ran 18:48.23 while Harris placed third in 18:48.38 with the battle wounds to show for it. 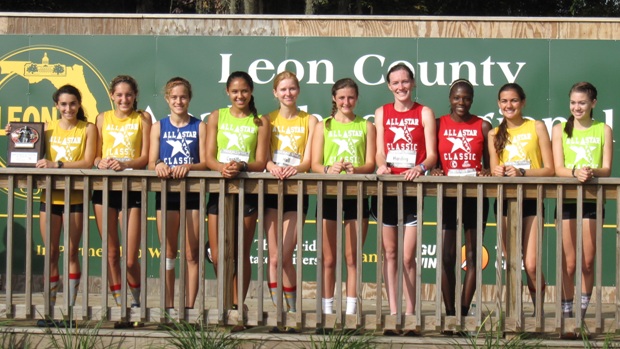 The Top Ten FACA Senior All-Star girl finishers. Individual winner: Katrina Santiago of the South is on the far left.

And in breaking down the team race, from the mile mark and almost all the way through the finish line you could tell that the South girls were poised to win, as they had five girls before any other team's number three. A couple of girls from West, Emily Harding and Destiny Johnson, along with Brenna Johnson from the East moved into the top ten, but in the end, the South dominated by placing five girls in the top eleven to solidify the win. Interestingly enough, Destiny Johnson who finished 8th overall was a fill-in for the West team as an original alternate from the South, truly showing the rare dominance by Southern Florida this season. This victory was only the second time the South girls had ever won FACA Senior All-Star Meet, the first time being seventeen years ago when the meet first started in 1997. Some might say it was the long taco socks that gave them the edge. The runner-up team was the East girls whose tighter pack gave them the edge over the West girls, who finish in third, with the North finishing in fourth place. 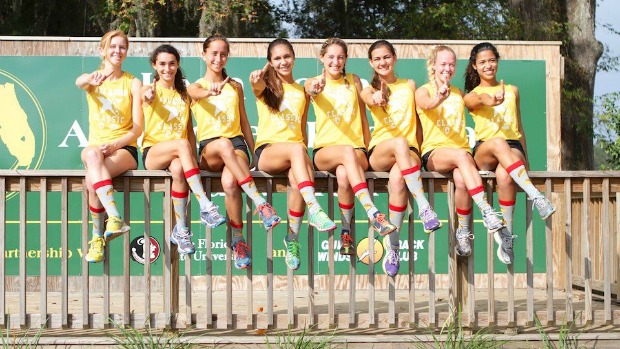 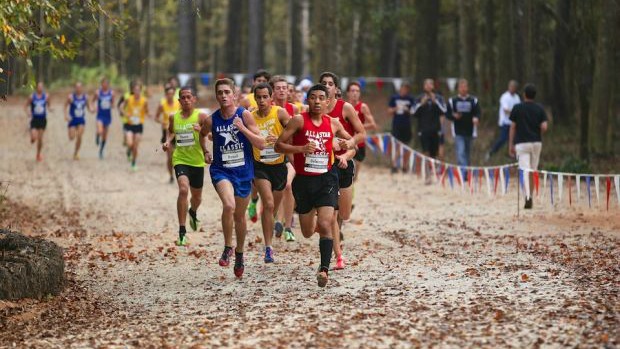 The boys race started right at 9:30am and just as in the girls race, it was a cool sight to see all of the bright colored jerseys all merging once again. "Like a four pack of Crayola crayons" someone remarked to me. After the beginning straightaway all of the teams seemed fairly even as there just one large pack of athletes, but it was clear to see there were more red jerseys (West) towards the front of the pack. Through the first mile the boys lead pack wasn't quite as defined as the girls pack, but you could see a few key individuals that were shooting for the win including: Castro and Velasquez (South); Delacruz, Stahl, and Nichols (West); Howell (North); and Pineiro (East). But between that point and the halfway mark, there were a few big changes, some athletes falling back with others moving up hard. From that point through the two-mile mark you had four lead runners running in a straight line: Velasquez, Stahl, Shackelford (North), and Pineiro. The only change between those four athletes as they came off the second hill and into the final straight was that Shackelford has moved up into second over Stahl, but Velasquez was picking up steam and couldn't be caught as he finished hard in a strong time of 15:38.35 for the individual win. 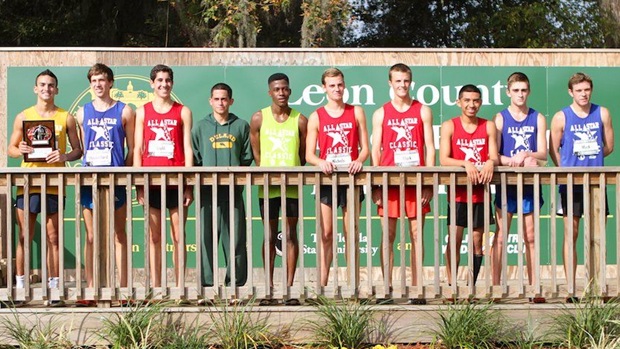 The Top Ten FACA Senior All-Star boy finishers. Individual winner: Manny Velasquez of the South is on the far left.

The battle for the team race started on Friday evening as Coach Jim Schmitt of the North worked late at the course with his boys breaking down racing strategy, but that didn't stop Coach Kris Keppel of the West as he challenged the boys of the North at the Friday dinner banquet. The North boys were the favorite as they had all seven boys on their team posting sub 16 minute times this season. Starting off the race, there was a fairly even start, a strong group of all four teams with the West boys moving towards the front while the North had a more relaxed start, packed in toward the back. Coming out of the mile mark the North had moved up into the first half of the race, while the West had almost completely gravitated toward the front of the pack, with the East and the South being more spread out. Now as the race went through the mile and a half mark on into the two mile, the entire West team made their move. After the lead four boys, that had one athlete from each region, passed through, the West boys had five of the next seven runners and looked to easily run away with the win having six before any other team's third. Although the North squad came up big on the last mile and actually had their fifth finish before the fifth runner from the West, their move was a little too late as the first four from the West were still inside the North second runner giving the West the win, 37 to 44. The East team finished in third with 63 points, while the South boys finished in fourth place with 83 points. 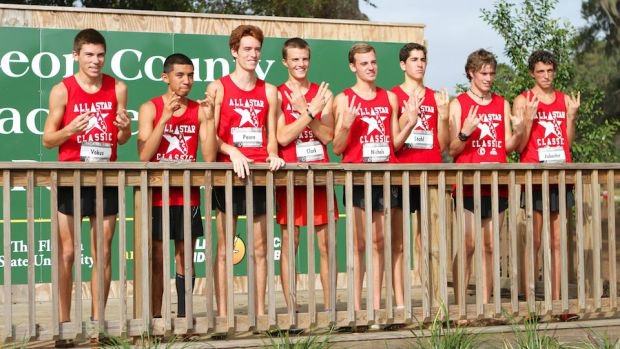 A big thank you goes out to everyone who helped make this another amazing event for all of the senior all-stars from around the state! Thank you all-stars athletes, all-star coaches, and all-star parents! Thank you Chris Sumner our meet timer, the staff at Lincoln HS who helped with the banquet, FLYRA and Dr. Bob with Distance Preps who was our main sponsor! Thank you to everyone who helped contribute to the event in a variety of ways, including taking thousands of photos, such as Mr. Mizereck, John Kalin, Randy Settle, and Herb Wills! Thank you once again to Coach Bob Braman and his FSU staff, the FACA and executive director Shelton Crews, and most importantly Coach Kristin McWilliams our FACA Cross Country Chair! Once again she put together once heck of a memorable event that we were all privileged to be a part of. The 2013 FACA Senior All-Star meet was a major success and many of us are looking forward to the next one in 2014! THANK YOU! =) 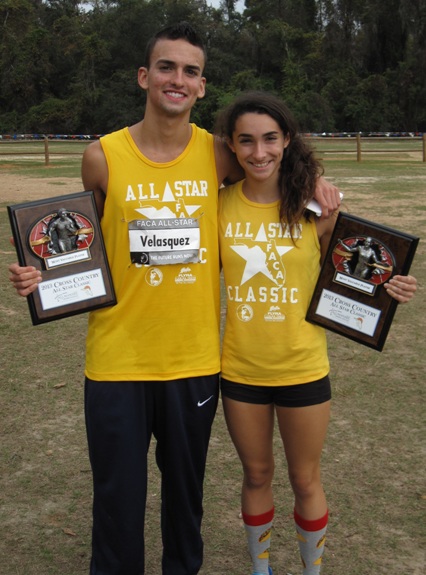