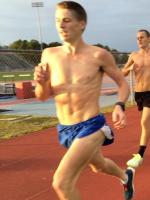 Head Of The Class: C/O 2014 Final Rankings...
Are you the best freshman, sophomore, junior, or senior? Where do you stack up against your peers? We&#39;ve tallied up the times and have found out who is at the Head of the Class for the 2012 cross ...

District 3A-2: Zimmerman Edges Khosla By A Hair, Givens...
Nine high schools, 18 teams, and 131 athletes took to Appalachee Regional Park for the 3A District 2 Championship. Runners graced the Tallahassee course as their journey to the state meet got one step...

Van Liere, Tallbacka Get Wins At Gateway Conference Cha...
While Eric Tallbacka and Danielle Van Liere earned much deserved individual conference championships, it was the Mandarin Mustangs who cleaned house, winning every team championship of the evening....

Alligator Lake XC Invitational Recap...
Fast times as always were the norm at Alligator Lake, but the competition was extra competitive this year with the addition of some Georgia competition that led the way. Garrett Westlake of PK Yonge (...