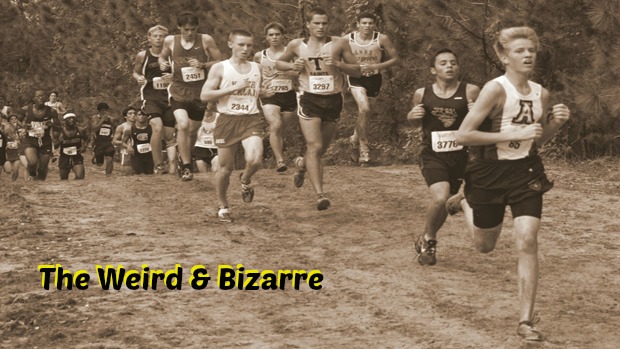 This week, I want to tackle, those little, weird things that happen to runners. These often leave us asking, “What is that all about”? Let’s dive in.

When I run hard, why do I feel like I smell blood?

This is actually quite common, and has even been documented in some research studies. This phenomenon typically occurs during or after an intense workout. Normally when we breathe in air, it enters the smallest areas of our lung (the alveoli). In these regions, oxygen diffuses across in lung tissue into blood vessels which carry it to the body. However, this lung-blood barrier is not always effective and when severe mechanical stress (i.e. heavy breathing, and higher blood pressures during exercise) exists, blood can push through into the lung tissue (West, 2004). This has been shown to occur at high altitudes as well (Elbridge et al., 2005). Although this blood leakage may be more prevalent in endurance runners than we realize, there is rarely cause for concern. If you actually cough up blood or are suffering from COPD or high blood pressure, consult a physician.

Why do my chest nipples hurt during some runs?

It is perhaps a rite of passage for all runners to endure a bout of nipple chafing. The most common causes are clothing and sweat. Our sweat contains not just water, but also minerals including sodium chloride or salt. When it dries it remains on our clothing. Combine these salt flakes with dirt, rubbing of clothing on the area and cooler weather and you have a recipe for nipple chafing. Over time, more sweat increases pain and scar tissue can develop.

Thankfully, there are many remedies available today. Vaseline, Bodyglide, and “nip guards” all work to prevent rubbing. Proper clothing, including the use of synthetic sweat-wicking fabric as a base layer is also helpful. There is some evidence cotton materials may precipitate chafing, although there is little research supporting this idea.

Why does my nose continually run when I run?

This is actually pretty common, particularly in colder environments. There are a few possible causes, including:

- Hay fever and allergies to pollen, grass and ragweed manifest in environments composed of these elements.

- Exercise-induced anaphylaxis, an actual condition in which exercise induces hives and flushing. This is considered a rare disorder.

Remedies for these depend on the specific cause, though none have serious health consequences.

Why do I itch at the start of some runs?

The “running itch” can have many causes. Dry weather and skin is most common – and the easiest to treat. Allergic reactions to medications, foods, and fabrics can also play a role. Commonly, these sources of itching subside after a short time.

Another source could be exercise-induced anaphylaxis (EIA), a form of chronic hives that is caused by exercise or other sources (Barg et al., 2011). Although rare, this condition can be serious in some people if the anaphylaxis causes more wide-spread allergic reactions.

Why when I run do I my hands always get cold?

The obvious answer here is… cold weather. In fact there is a clinical name for this, Raynaud's (pronounced ray-NOHZ) disease. This is a condition in which the nose, finger, and toes become cold or even numb during stress (cold is one, although not the only stressor). For most people, Raynaud's disease is more a nuisance than a disability.

However, there is some research that shows more highly trained endurance athletes may exhibit symptoms of cold extremities. This is partly due to lower body fat and simply increased exercise time. However, there is also evidence that highly trained endurance athletes are better at getting blood flow to working muscles and thus away from none working muscles.

Now, if you are experiencing cold hands throughout the day, than more serious health conditions may be at work. Anemia, diabetes and hypothyroidism are just a few concerns with chronically cold hands. Again, consulting a physician in these circumstances is necessary.