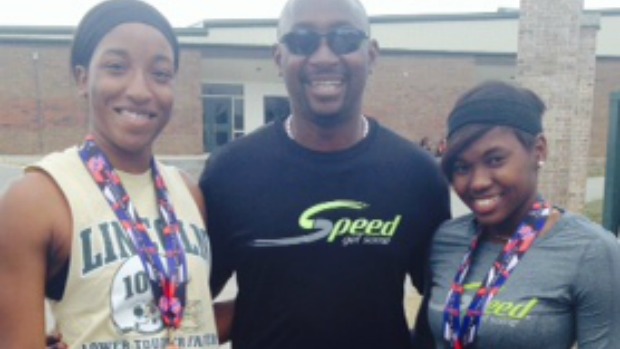 Junior Jadzia Beasley (above right) and teammate Briana Huff (above left pictured with Coach Corey Poole) aren't waiting around for the official outdoor season to begin. The Lincoln High School duo who run for the North Florida Speed Alliance club team have competed in three indoor meets in the last month and a half.

After finishing second at the Indoor Alumni Age Group Invitational in Alabama and fourth in the 200 at the Jimmy Carnes Indoor Meet, Beasley finally got the "W" this weekend. The junior came close to a personal best with a time of 25.33 to win the AAU National Indoor Track & Field Championships in Houston, Texas. Huff was fourth in 26.43. Although Poole was unable to attend due to his son taking college exams, he says he was pleased with what he saw on video.

"I knew they were capable of running well because in practice they had been hitting the times I needed them to run. We are just getting back into track and field and I was very excited for both of them. They aren't really on the map, but they've dedicate the time to be the best and now the hard work is starting to show off, and they can get ready for the season."

For Beasley, the chance to travel outside of the Sunshine State over the past few weeks has been an amazing experience. She says just getting to run against other top runners was fun, but winning it all, made it even more special.

"It really meant everything to win it because I remember when I wasn't running as fast as I am now. I never thought the hard work we put in at practice would amount to anything. Winning it meant I was finally doing things right and making my coaches and my family happy. I was literally on the podium about to cry because  I didn't think I'd make it this far."

Also wearing a medal was her teammate Briana Huff. Not only are the two teammates on the North Florida Speed Alliance, but on the Lincoln High School team as well. Beasley says the two talk a little trash from time to time, but it's all in the nature of competition, and pushing each other to the max.

"All the time it is competition between us. We tell each other there is no stopping and push each other to get the best out of each other in practice. We've created an amazing bond over the past three years we've known each other and we just love each other."

Beasley and Huff are hoping to put Lincoln back on the map. Beasley says it's almost as if they have been underdogs finishing in the top five, but never first, and never in the spotlight.  After this weekend, that has changed the city of Tallahassee welcomed them and their accomplishments. In late December, the duo along with Brianna Watts-Pitts formed three-fourths of one of the top 4x200 meter relays across the nation for the 2014 indoor season. One thing is for sure, Beasley knows these girls have the and dedication to be successful this year.

"We are proud of whatever we do. Whether it'd second place or third place it pushes us to be better. We come back the next day at practice and work ten times harder than we did the first time becuase we have to understand what it takes to be the best."