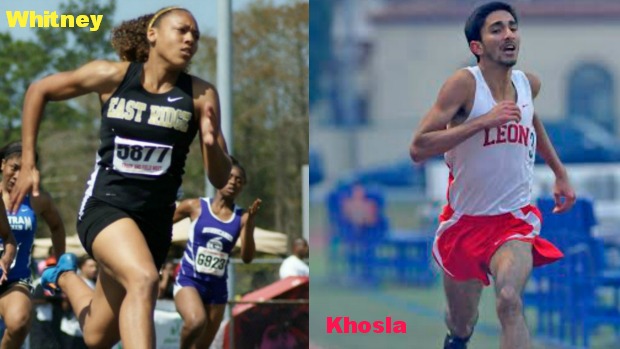 Kaylin Whitney came into high school with high expectations. As a freshman, she exceeded those winning state titles in both the 100 and 200 meter dash. Coach Angela House says her work ethic is what every coach wants in an athlete.

"She strives to bring out everything she has inside. She sets goals for herself and then accomplishes them. Kaylin strives to be the best in the classroom and on the track."

The pressure never seems to get to the youngster; always giggling, joking, and having fun while others are serious. House explains that is just the way she is."

"She’s relaxed and has fun before every race. When she’s warming up, I always ask her “how do you feel”. Her answer is always “I’m good Coach, I’m ready are you ready Coach? Her thought process is “yes I want to win every race…and if I don’t win every race, I’m definitely going to leave everything out there.”

Whitney started off her 2014 season running the 400 meter dash, an event to build her base, and prepare her for the meet of the season. In her first meet, ever running the open quarter she posted a time of 58.07. Not bad for a debut. The "conditioning continued the following week at the Astronaut Open where she ran the 400 yet again along with the 200 meter dash. 56.76 and 24.81. Those times let House know she was ready for the 100.

"We thought it was good idea getting her to run the 200/400 and then later on at the next meet to run the 100. We knew she was ready, but sometimes you have to work yourself back up to where you were before. I didn’t want to push her as well as the other athletes we have. We just take it day by day."

The highly anticipated match up between Whitney, Deanna Hill, and Teahna Daniels finally came at the Lake Highland Track & Field Elite Classic. Whitney lit up the track with a US#1 time of 11.59 and followed that up with a re-match against Hill and Daniels along with Sharrika Barnett of Oak Ridge. What does she do for an encore? How about a US#1 200 meter dash time of 23.58. House says that competition makes her want to run and pushes her to work even harder.

"Kaylin thrives on the competition against anyone. She just loves to compete, it doesn’t matter who it is. Not only that, she respects the other competitors and just know she has to run her race, like she does."

While Central Florida was putting up national times, South Florida was doing the same with the likes of Krystal Sparling, Diamond Spaulding, Symone Mason and a slew of others. Not shying away from competition Whitney faced that group along with Daniels and Barnett at the 50th Bob Hayes Invitational. The sophomore re-wrote the national leaderboard running a wind-aided 11.36 (2.8 wind) and US#2 all-conditions 23.45 (4.8 wind) to sweep both the 100 and 200 for yet another week.

Up next will be the Florida Relays and Lake/Sumter County Championships before starting the state series. Coach House says the youngster has seen a great deal of success already and there is only more to come.

"I believe Kaylin’s future holds a lot of opportunities for her on the college level and professional side. I feel people will say great things about her as a student/athlete and young lady, hoping one day that she will have the opportunity to compete in the Olympics representing the U.S track team with character and integrity."


Sukhi Khosla ended the 2013 cross country season with a 3A state championship. The transition from the cross country course to the track was easy for the junior.
Physically he had much of the same training and since he enjoys track more, the switch mentally was no problem at all. Coach Andrew Wills says going into the season the plan was to ease him back in.

"I definitely wanted to limit his races in the early season and keep his mileage up. Sukhi seems to stay healthier when he's not racing frequently."

The distance standout made his debut in the DMR and SMR Relays at the Chiles Track & Field Championships where split 4:17 and 1:58 respectively. This was the confirmation Wills wanted, assuring him that Khosla was ready to run in an open race.

"In the relays I just wanted to see what his level of fitness was without having to race hard. I was pretty sure he was ready to have a great track season. Those times just backed that up."
Six days is all Khosla needed before his next race at the Bolles Bulldog Classic. He had a track workout on Tuesday while the other days were distance runs. That speed and endurance mixture showed off with sizzling times on Saturday. Their plan was to concentrate on the 1600 and then come back for the 3200 to see how he handled the double and according to Wills he handled it flawlessly.

"Leading up to the race, the conditions were pretty bad. I wasn't sure the race would be fast in the cold and wind. It was definitely an impressive race, leading the whole way, breaking the wind and still going 4:13. I'm not sure he was pumped at all for the 3200. I knew he would be ok when he got in the race though. The only plan for the 3200 was to run fast, but stay comfortable early on. At about 2600 meters I gave him the green light to go hard if he felt like it. I think the meet record, the announcer and the great crowd really got him going on the last 400."

His time of 4:13.02 bested the field by over seven seconds and was the fast time in the U.S. for 2014. The mark was also a new personal best by eleven seconds. Wills says Khosla was excited to actually run that fast and his training indicated he could do so, but finally getting that chance had to be a great feeling for him. In the deuce, his time of 9:11.70 was a then US#2 and current US#9 time, six seconds faster than he ran at the same meet a year ago.
Recently, Khosla has been battling a cold. His status for the upcoming FSU Relays was originally up in the air, but Wills now says he thinks the junior will be ready for the 3200 on Friday Night. It's an opportunity for Khosla to improve his personal best even more in that event. He has a few more meets left on his schedule, but only needs one more after FSU to have his required four meets. Big Bend Conference Championships on March 29th and the 15th Annual Chiles Capital City Track & Field Classic on April 15th could be his last meet before the postseason. There is a small possibility he would attend Florida Relays or some other meet not already on their calendar. Wills says Khosla is much better than he was last track season at this time.

"Just being a year older and stronger has helped. His speed has improved since last season and his aerobic strength is much better. The talent, work ethic, knowledge of running tactics, desire to win and consistency in training have gotten him to the level he is at now. The first and only goal right now is to keep him healthy all season. If he's healthy, he could have a great season. I really don't think about the future and what it holds but, right now he's a very good runner."