A day after setting a Baylor University school-record with a 10.02 in the prelims, 18-year-old Trayvon Bromell of St. Petersburg scorched the track and wowed the packed house at the Texas Relays. He laid down a world-leading and wind-legal world junior record of 10.01!

This impressive time came even after a rocky start where the college freshman had a slight of a stumble out of the blocks.

"Coming out of the blocks, I feel like I was a little too focused on trying to get out too fast," said Bromell, "I kind of was leaned over too much. But I kept my composure and stayed focused. And came up out of my drive (phase) and just finished strong"

Stumbled but still blessed ! Thank you Lord for letting me see another day and race

Trayvon is focused on big goals, despite being so young. The fact that he is younger than quite a few high school seniors doesn't stop him from dreaming of NCAA titles, 9-point times, US Championships, and especially making the team for Rio in 2016.

The big day Saturday came after a series of inspirational tweets by the prolific twitterer @TrayvonBromell early in the day. The positive thinking and hard work has obviously paid off and man are we proud of the Gibbs High alum back here in Florida! 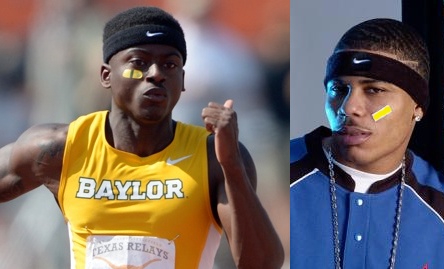 As for the band-aid under his right, eye? Trayvon had no comment other than he does not believe that he resembles rapper Nelly. You be the judge.

@flrunners hahaha i don't not look like nelly but thank you

Interview with Trayvon after the race