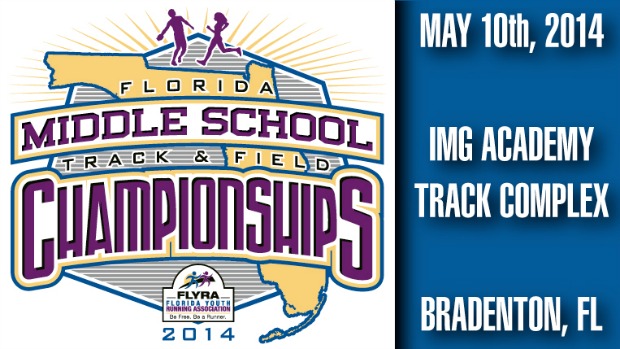 The 2014 FLYRA Middle School State Track & Field Championship will take place at IMG Academy on May 10, 2014. The field for this year’s Championship will be the largest-ever, with more than 600 runners expected to descend on Bradenton, Fla. with an expanded field of qualifying events and the introduction of a new elementary division.

“As a venue that was recently named the home of the 2016 and 2017 NCAA Division II Men’s and Women’s Outdoor Track and Field Championships, we are very much looking forward to creating a memorable event experience in our world-class IMG Academy Stadium for the young athletes partaking in the FLYRA Middle School State Track & Field Championships,” remarked Blake Ulrich, Director of Events, IMG Performance.

The 2014 FLYRA Middle School State Track & Field Championships will feature 20 total events and competitors will compete in either the Middle School (6th-8th Grade) or Elementary (4th-5th Grade) division. Competitors qualify by meeting a qualifying standard at any event that utilizes fully automatic timing, or by finishing first or second at a Regional Championship event. The state of Florida is divided into six regions: South; Southwest; East; West; North; and the Panhandle. The Regional Championships take place throughout April.

“FLYRA’s mission is to provide the best opportunities for kids around the state of Florida to compete in the sport they love and to learn to enjoy competition at an early age,” said Jason Byrne, Director, FLYRA. “Athletes and spectators can expect more of the same high quality events that they've enjoyed the past two years in Clearwater, only now at IMG Academy in Bradenton, Fla. We will be providing timing from the press box, as well as a live stream broadcast of all the events. In addition, we will have more certified meet officials than ever.”

IMG Performance, a division of the global leader in sports, fashion and media, IMG, is aimed at developing sports performance research, products and services that have grown out of the division's world-leading integrated academic and athletic training institution, IMG Academy. Development areas include: Personal & Organizational Performance; Performance Events; Labs & Research; and Educational & Training Products and Services, including IGNITE 360 Performance Training.