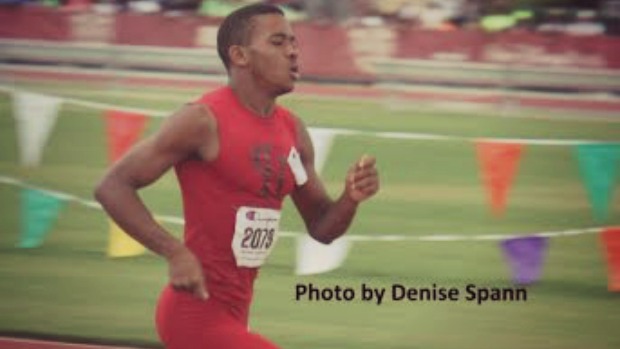 Sergeneno Rankin is a senior at South Plantation High School. Last season, he posted finished 9th at the 4A state meet in the 800 meters. This year, he set a personal best of 1:57.00 at the BCAA Championships and is also a member of the schools' 4x400  as well as the 4x800. This summer with the Plantation Heat Track Club, he ran a personal best of 49.45 in the open 400 meters. Denise Spann caught up with him as we head into the state series.

How did you get into the sport of track and field?
When I was younger I would race my older cousins every year when we went home to visit. Every year on the phone and when I saw them we would just talk about racing each other barefoot on the rocks in the road, not on an official track with top of the line racing spikes and timers. All that mattered was who won, not the age and in most cases not the gender. No head starts just running. When I would race the older children I would win. Once I went to middle school I tried out because that’s all you did when I went home, it was tradition. I saw pictures of my uncle and cousins racing each other on the same dirt road we raced on. For me running track and field was just an extension of a family tradition in Mississippi.
What were your goals at the beginning of the season?
At the beginning of the season I didn’t have a time in mind I had a place in mind. I wanted to go to states and win. Last year, I didn’t expect to win, but I expected to medal.I didn’t perform well enough to get a spot on the podium. This year I want to do more than just make the podium I want to be at the top.
What are you goals now that the state meet is approaching?
My goal is to return to states in the 800 meter open race and put myself in position to win.  I would also like to be able to compete with both my 4x800 unit and 4x400 units at the state championship.
What is your favorite moment so far this season?
My favorite moment of the season  has been competing against our "B" team in the 4x400 because often we put members of the planed "A" team on the other team to race us. GThis gives us an opportunity to tease and pick at each other about who is going to win. You don’t want to lose to the other team just because you know they’re going to make sure you hear about it later.
How do you think your team is looking going into the state meet?
I think with the right mind set we have the ability to medal in all three of our relays at states. We also have a strong hurdler and two really talented sprinters who have to the potential to go to state and make a statement along with myself and another 800 meter runner. Also, there some outstanding field event competitors on both the male and female teams; high jump, pole-volt, and shot-put in particular.
Who do you look up to in the track and field world?
I admire both female and male track and field athletes because of their work ethic, Allyson Felix because of her strength, perseverance, and poise. I also appreciate Jeremy Wariner because when he wants the win he goes and gets it. Galen Rupp and Meb Keflezighi also inspire me rokeep going because no matter how far I’ve ran they’ve always run farther, harder, and longer.
Do you look to up to any high school athletes? If so, who?
There are so many athletes I look up to but one that stands out my mind is Mary Cain because she isn’t just dominating high school she’s going to professional competitions and is rising to the occasion against veterans of the sport.