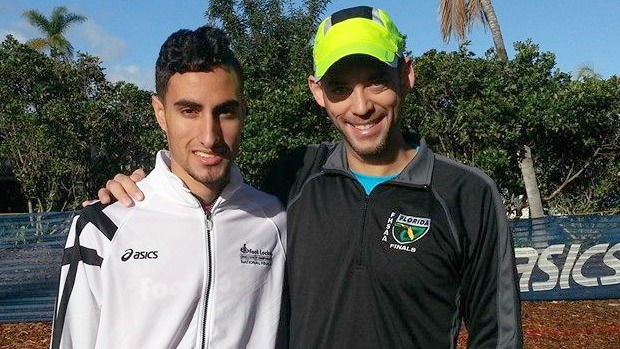 I have been extremely fortunate to have experienced BOTH Nike Nationals (Portland, OR) and now Foot Locker Nationals (San Diego, CA) during my short nine year coaching career. More importantly I was able to experience both races with outstanding people like Nick Diaz and my wife Mary. 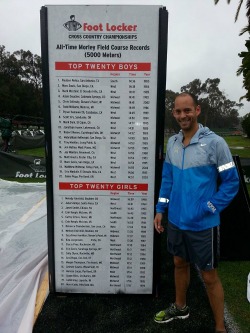 36 years of history! Trust me they make you understand the importance of being one of the lucky 40 boys in the entire country to be in San Diego. There are just a little over 1,000 male runners to have ever toed the line at the Foot Locker Finals ever and now Nick is among that elite group.

Even though it had not rained for over TWO months in San Diego, the “Sunny California” phrase did not come true until Saturday. That made the course preview a very cold and wet run (in the 50’s with rain sucks). The day of the race it was a sunny 60F morning. It beats the 18F snowy day we dealt with last year at Nike National’s.

It was amazing to see and hang out with guys like Ryan Hall, Ed Torres, Meb, Alan Webb, the Gouchers and many other runners that we dream of one day toeing the line with. All the pro-athletes did a great job keeping the kids relaxed and enjoying the moment. 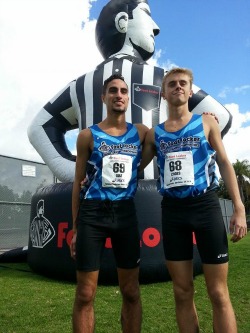 Nick and StevenI was fortunate enough to see our two Floridian’s compete against the best of the best; Nick Diaz who I coach and Merritt Island junior Steven Cross. Both athletes are very similar in character and through victory or defeat they have always demonstrated respect for each other and the sport. I will treasure the next five months of competition with Nick before he heads up to Gainesville and joins the Gator Nation. As for Steven, I can only wish him and his amazing family all the best. 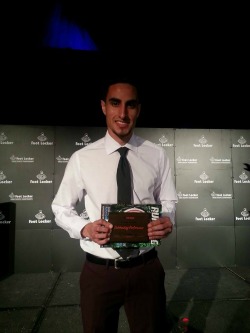 The food and presentation of the awards was truly 1st class. Im sure the dance for the kids after the banquet was pretty good also (considering Nick pulled off the all-nighter). What!

Just like at Nike Nationals the kids received a great deal of amazing gear from Asics. My favorite had to be the back-pack and the all white jacket.

When I was walking to the bus after the race I did not turn around and say “Good-Bye” to the course or take one final look at Balboa Park. Why? Because I hope to be back here one day with another future star. One thing is certain; I will NEVER forget my first trip to Nike and Foot Locker Nationals. Thank you Nick!