St. Thomas Aquinas won last year's 4A state championship by 59.5 points over Northeast. This year, Northeast has closed the margin, but Aquinas is projected to win by 12 points.

The Raiders have 13 athletes in scoring positions in nine events compared to Northeast's nine athletes in eight events.

St. Thomas Aquinas Head Coach Alex Armenteros has slowly brought the Raiders back into the winning fold going from runner ups in 2012 to two consecutive wins in 2013 and 2014. St. Thomas Aquinas has a well balanced attack and a veteran crew of five seniors contributing to the winning total. In the sprints, Texas A & M signees, Krystal Sparling and Diamond Spaulding will bring in huge points. Sparling is seeded second in the 100m, and fifth in the 200m; Diamond Spaulding is seeded sixth in the 100m and second in the 200m. 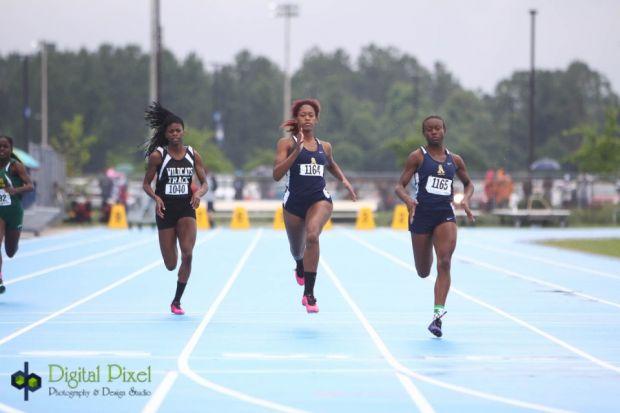 Northeast has good balance as well and will be vying for their second championship in school history-the last won in 1984. Camora Sanders, a Virginia Commonwealth signee is seeded first in the shot put; Kayla Woulard is seeded second in the long jump and fourth in the 400m dash; Camora Sanders and Kameliah are seeded third and fifth in the discus; Jeyland Valentin is seeded fifth in the 100m hurdles and second in the 300m hurdles; and the 4 x 100m and 4 x 400m relay teams are seeded sixth and second.

Stacey Destin, Santaluces. High jump and long jump. Destin is seeded eight this year with a mark of 5-02.00. Last year, she scaled 5-08.00 which is better than Plant's Anna Malizia's 5-06.00 number one seeded mark. Destin is seeded sixth in the long jump with a mark that is 1 a foot and a half inch shorter than her winning jump of 18-10.75 last year. Devin D'Oliveira has the number one seed with her 18-07.50 regional mark. 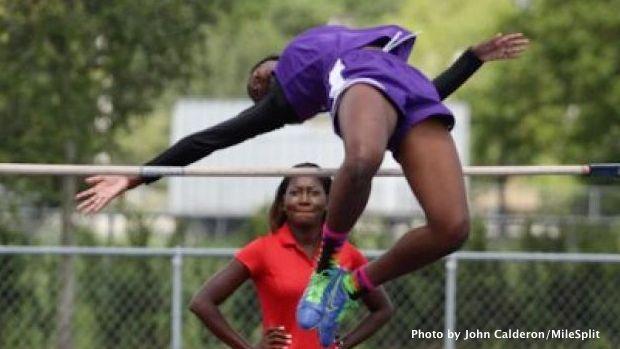 Brittany Bowald, Atlantic Coast. Triple jump. Bowald is seeded fourth behind last year's runner up, Ebony Luster of Lake Mary. Luster's mark of 40-07 no wind indicator mark is the furthest in any conditions in class 4A.

Camora Sanders, Northeast. Discus. Sanders is seeded third behind the sister duo of Phoebe and Sophia Gustely of Monarch. Phoebe Gustely's season best of 144-04 is 7 feet 10 inches better than Sanders best this season. 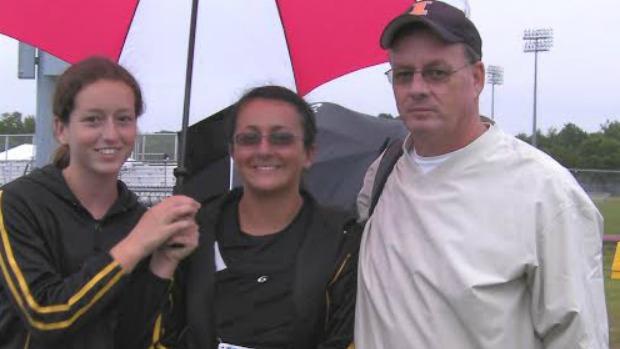 Sinclaire Johnson, Lake Brantley. 800m & 1600m. Johnson owns the fastest time in the state with her 2:10.07 win at the Region 1 meet. She is two seconds better than a pair of freshman, Asia Ervin of Timber Creek and Melanie White of Winter Park. The 4A and all classification state meet record of 2:09.44 was set by Northwestern's Skyler Warren in 2009. Johnson is seeded second in the 1600m behind Kayley Delay of Fletcher. Delay is the only runner to slip under five minutes this year recording a 4:57.93 in winning her district meet. Johnson has never broken five minutes. Her personal best of 5:01.49 was set in winning last year's championship. 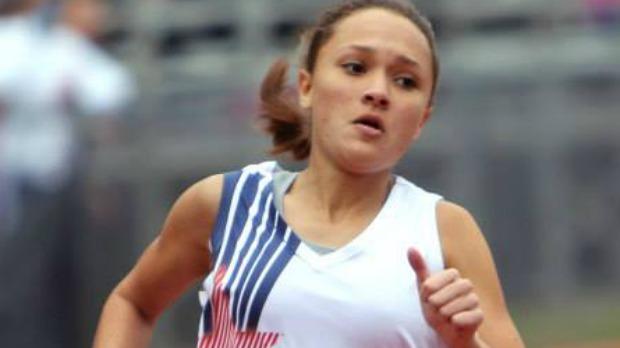 Alexa Cruz, St, Thomas Aquinas. 3200m. Cruz motored to 15.67 second a victory last year. This year will be a bit tougher as she faces ninth grader and 4A state cross country champion, Rafaella Gibbons of Winter Park. Gibbons ran the state's best time in winning the FSU Relays in 10:42.20. Cruz's seasonal best came in early March where she posted a 10:48.90. Cruz will be doubling back from the 1600m and a leg of the 4 x 800m relay while Gibbons will have the 4 x 800m from the morning to contend with. 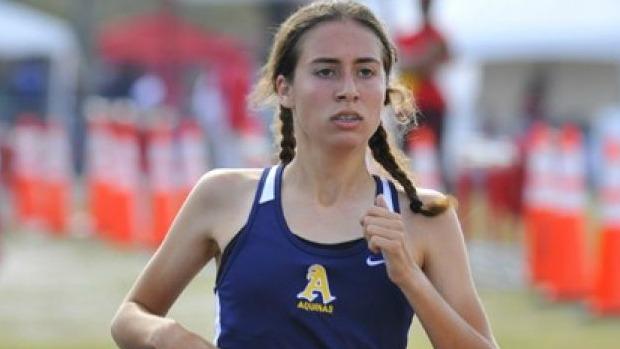 Other races to watch

100m. Atlantic Coast's Chelsea Francis comes in with the number one seed. She'll have tough competition from last year's runner-up, Krystal Sparling and super soph Symone Mason who will be opting for the 100m dash over the 400m dash this year.

200m. Southridge's Symone Mason sped to the second fastest time in the state with her 23.57 at the Region 4 meet. That is 1.03 seconds faster than she ran in finishing sixth last year. Diamond Spaulding owns the second fastest seeded time of 24.05. The state record of 23.05 was set by Kalli Davis-White of Boyd Anderson in 2013. 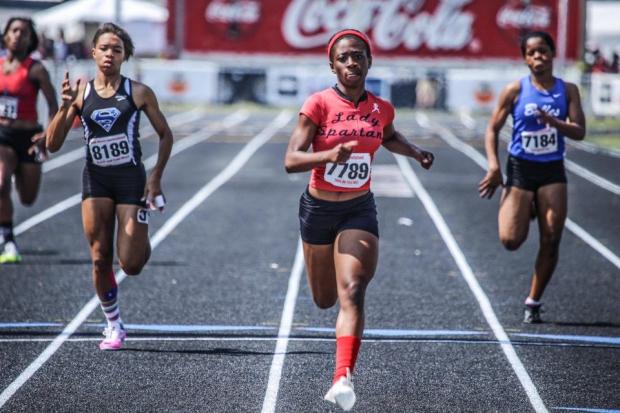 400m. Oak Ridge senior and University of Florida signee, Sharrika Barnett owns the fastest time in the state with her 53.32 at Bob Hayes in March. She enters as the number one seed time of 53.44. The all-time state meet record is 52.51 by Sanya Richards of St. Thomas Aquinas in 2002. The 4A state meet record is 52.68 by Ebony Eutsey of Southridge in 2009.

The 4A battle pits Orlando area rivals Dr. Phillips against Lyman. The two went head to head at the Region 1 meet with Dr. Phillips coming out ahead by 8.5 points. In the bigger state venue, the Panthers are projected to win by a scant two points.

Two years ago, Coach Jorge Fleitas left his alma mater and his nine year coaching position at Columbus to take the reigns over the Dr. Phillips program along with his wife, Angie. Then he told flrunners.com's Todd Grasley that he was hoping to "bring us some hardware in the 2013-2014 school year." He came up a bit short last year finishing third with 43 points, but this year his team has seven athletes in seven scoring positions for a projected 58 points.

The Panthers can set the tone for the day with the first event, the 4 x 800m. They are seeded first and are the only team in the state to have gone under 7:50, recording a 7:49.72 at the regional meet. They will then hit the track for the preliminaries in hopes of positioning themselves for the afternoon finals. They'll look to junior Alvin Bryant who is seeded number one in the 100m and 200m dashes, senior Jamari Smith who is seeded second in the 400m, senior Vernon Walker who is seeded fifth in the 110m hurdles and second in the 300m hurdles, and they finish off with the second seeded 4 x 400m relay team. The prospects look very good for the Panthers and Coach Fleitas will come out to be a pretty good prognosticator. 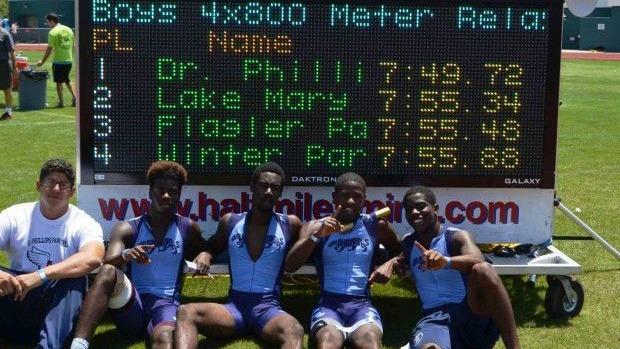 Lyman Head Coach Fred Finke is in his 40th year of coaching and teaching. In that span he has had five individual cross country champions and ten individual track champions. The team title has eluded him at Lyman though. He did win the 1A state boy's title at Mount Dora Bible in 1983.

Unlike the Panthers, Lyman has big points coming from the throws and pole vault. Defending state champion Sean Clarke is the number one seed by more than a foot. Senior Adam Shuler is seeded first in the discus and second in the shot put. In all the Greyhounds can post 28 of their projected 56 points before hitting the track for the finals. On the track, they have fourth seeded Tyreek Thyme in the 300m hurdles; Jordan Armstrong who is seeded second in the 1600m and fourth in the 3200m, and Joshua Jacques who is seeded first in the 3200m. Maybe the 40th year will be the charm for Coach Finke and his Greyhounds. 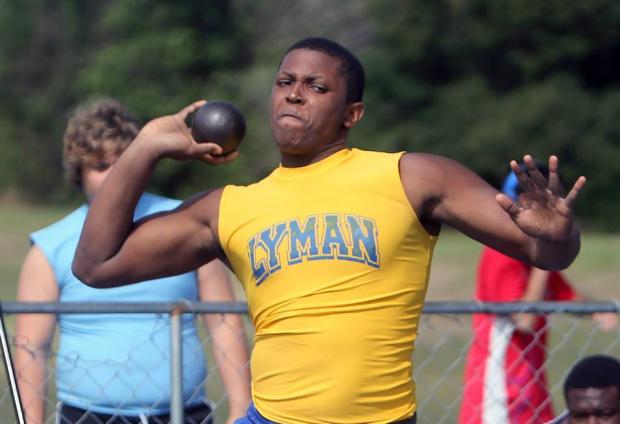 Trevon Grimes, St. Thomas Aquinas. 300m hurdles. Grimes won as a frosh and enters as the number one seed this year. Fellow sophomore Damion Thomas of Northeast owns the fastest time in class 4A with a time of 37.39, which is an eyelash better than Grimes 37.42 mark set the regional meet. Thomas finished third in his region and is seeded tenth. 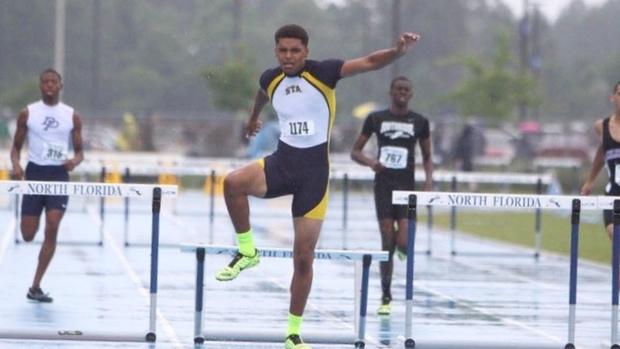 The Patriots are seeded sixth this year after winning last year's event in 7:48.22.The lone returnees from that team are Ari Cogdell and Dawun Hylton.

Kyren Hollis, Olympia. 800m. Hollis won last year's event by a slim 0.06 of a second and is the number one seed this year. Hollis has opened a bit of a gap over the field by improving his personal best to 1:52.25.- that's one second clear of the next best time in the field. 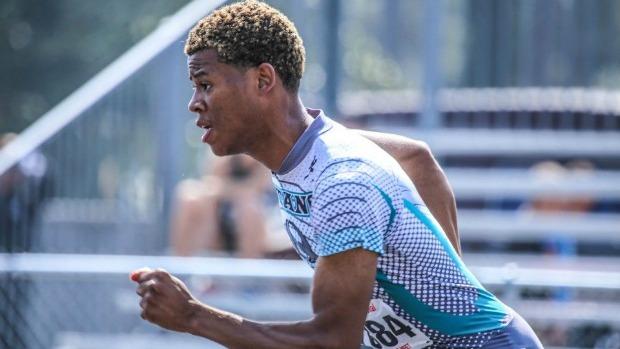 Jack Guyton, HB Plant. 1600m and 3200m. The University of Florida bound Guyton crushed the fields with his fast punishing finishes. He is three seconds plus better than the next 1600m challenger in class 4A entering Saturday's final. He is seeded third in the 3200m and his personal best of 9:08.60 came in finishing sixth at the FSU Relays. Ahead of him was Liberty University signee James Zentmeyer of Sickles who finished third in a 4A best of 9:04.15. Zentmeyer will also be doubling. Lyman's Joshua Jacques, the 4A state cross country champion, is seeded first and is not running the 1600m. That may leave him with fresher legs than the other contenders. 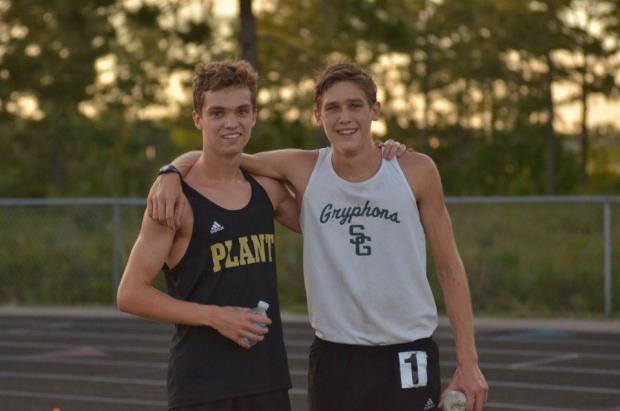 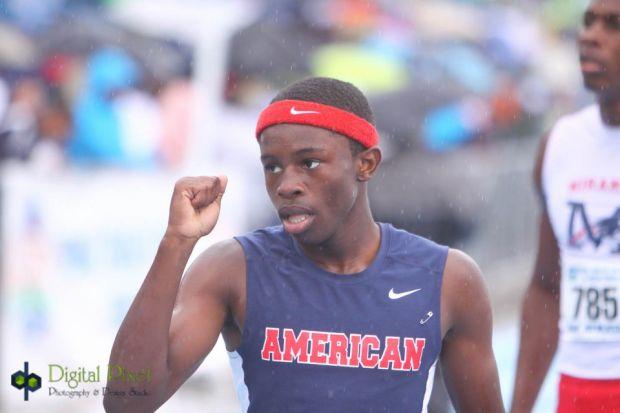