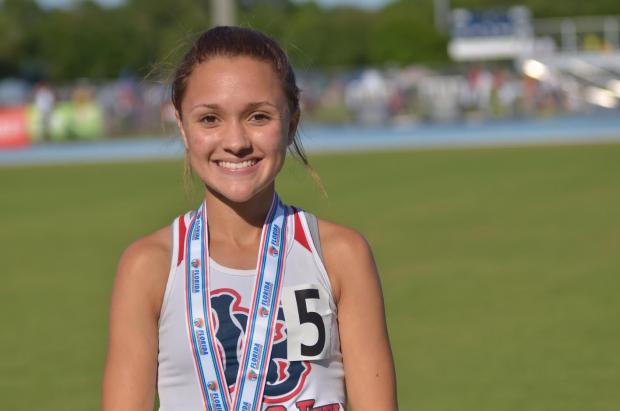 Just like Superman's alter-ego, the mild-mannered reporter, Clark Kent, Lake Brantley's Sinclaire Johnson returned to her humble job, selling shoes and socks and running gear at Fleet Feet in Altamonte Springs on Sunday, just hours after setting down some of the fastest high school times in the nation on Saturday at UNF.

Many athletes would have skipped work on Sunday after running a US #6 in the 800m and a sub-five-minute 1600m to come away with a pair of state titles. Not Johnson, she was back to her humble roots the very next day. Business as usual for the elite athlete disguised as a retail clerk.

Lacrosse was actually a first love for Sinclaire. She played all through middle school and was considering continuing in high school when her parents sat her down and explained the opportunity for scholarships that awaited in track and field and not so much in lacrosse. The selling point was that running would be great training for lacrosse. 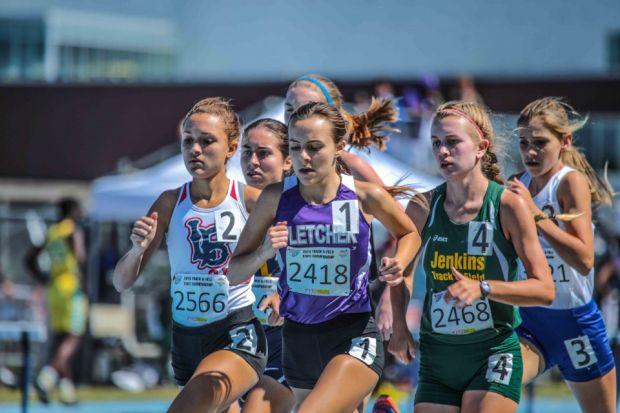 Johnson started off in cross country and as a freshman, placed the highest of anyone else on her team in her very first race.

"I remember there were three or four seniors on the team and that's when I got the idea I could go somewhere (with running)," Johnson said.

It certainly helped that Johnson came from Krypton. Johnson's mother Claire runs marathons and ultra marathons (50-mile and 100-mile races). It would not be long before the super-human abilities of Johnson became apparent. She made cross country states as a freshman. She won her first state title in the 800m as a junior and also won the 1600m that year. Her senior campaign swelled with promise before a dose of kryptonite got her.

"It started early in the season and got really bad toward the middle," Johnson said. "My ankle hurt so bad I couldn't run, there was a whole week where all I could do was train in the pool."

Johnson got a bad dose of Achilles tendinitis and it threatened to de-rail her senior campaign.

"Finally, toward the end of the season, the inflammation went down and it didn't hurt as much," Johnson said. 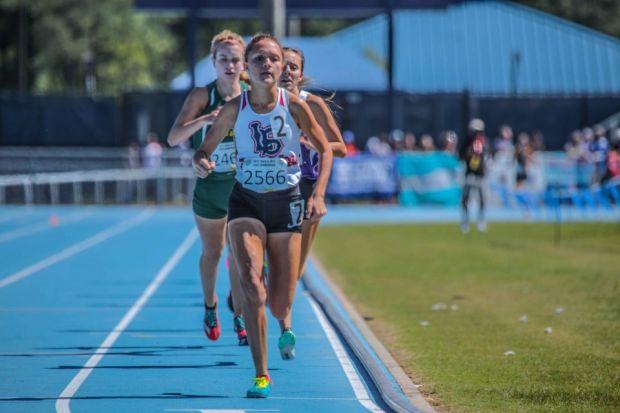 She attacked the 2015 state meet as if she were attacking an arch-villain bent on world domination.


First, it was in the 1600m where she fought through a dense and long-standing pack before breaking away to a 4:59.93 to repeat as state champ. Next, it was the 800m where she took down another of her arch-nemeses, breaking the 2:10 barrier. 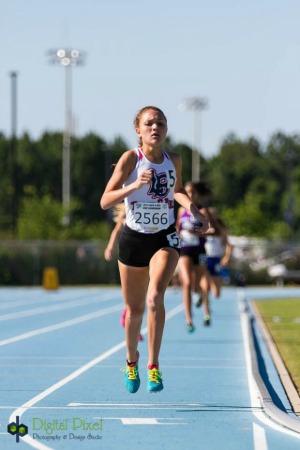 Those last few hundredths of seconds were all that stood between Johnson and victory. She got an unexpected ally in Wellington High School's Maddie Beaubien at the 2015 state meet.

"It helped that Maddie went out so fast on that first lap," Johnson said. "I knew a strong first lap was just what I needed."

Johnson said that the 61-second split on the first lap was just the boost she needed and that a 66 or 67-second final lap would vanquish her foe.

"When I saw the clock say 2:02, I thought to myself that I have seven seconds left to get under 2:10," Johnson said. "I think it's easier psychologically on that first lap when I have someone to push me."

And so Super-Sinclaire finally defeated 2:10 and won the 800m final in 2:08.71, setting down the FHSAA meet record. With her foe defeated, Johnson elected to shut down her track season, giving herself time to recover from her tendinitis. She will take the next couple weeks off and then start training for her final high school season of cross country.

It's going to be a busy summer for the mild-mannered Johnson. College coaches are allowed to contact her over the phone on July 1. It will be open season as coaches across the country will be interested in acquiring Johnson's services.

"It's a little overwhelming," Johnson said. "There's so much out there."

Johnson will hang up her cape for the summer but don't expect the mild-mannered alter-ego to stay quiet for long. Cross country season starts up in earnest in September and there will be a new host of villains to vanquish.

See what Sinclaire had to say after the race!