All eyes were on Khalifa St. Fort, fresh off a third place showing at the Dream 100 in New York City. St. Fort posted an 11.68 in the prelims, and had the second fastest time going into the finals. However, she was absent for the finals. Fellow South Floridian Twanisha Terry of Miami Northwestern, who had little rest between her trip from Cuba and the Caribbean Scholastic Invitational to New Balance Nationals. Terry finished with a silver medal one one-hundredth of a second behind Jayla Kirkland of Michigan in 11.34w.

The Miami Northwestern Lady Bulls proved why they had one of the best relay groups and overall track programs in the country setting a new meet record in the girls 4x200m relay. Terry, Lakayla Harris, Ulani Toussaint, and Shamarah Shannon clocked a blazing 1:34.87, the fastest time in the country as well. The previous meet record was 1:35.65 set in 2003 by Dallas Skyline (TX).

MNW also ran a very impressive 45.52 in the prelims of the 4x100m relay to advance to Sunday's final.


Brittany McGee said Florida should have a "heptathlon team" following New Balance Nationals. Creekside's Jordan Fields was second, followed by McGee, Port Charlotte's Michelle Atherley, and Gillian Morrison. Twenty points separated first from fourth place. The meet marked the end of their high school careers for McGee who won four gold medals at the 1A state meet this year and is headed to Stanford and Atherley who is Auburn bound. 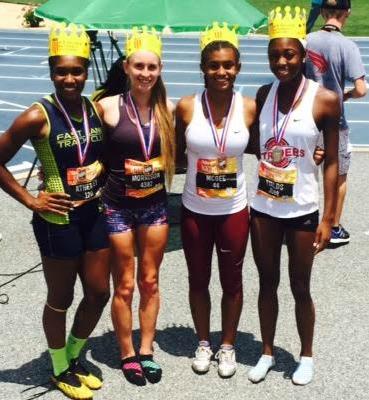