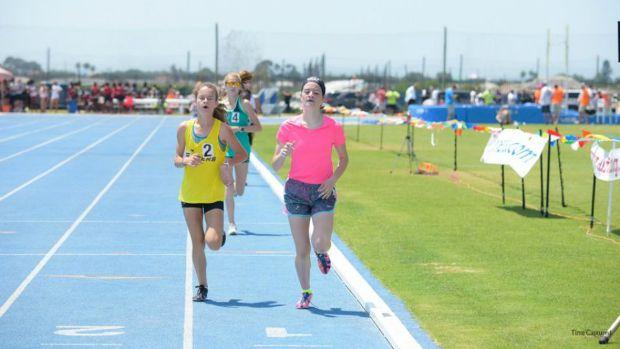 Move over Tyrese Cooper, rising Teague Middle School 8th grader, Ashley Klingenberg, running for Central Florida Gliders, just ran 4:38 in the prelims at the USATF JO Championships in Jacksonville. Her time in the 13-14 year old division was a personal best by ten seconds and five seconds faster than Daesha Roger's previous meet record. We caught up with Gliders Coach Mark Robinson to talk about the preparation leading up to the race, the performance and gain insight on this future distance star.


What was her training like leading up to the 1500 and this meet?

Ashley's 2015 track season with the Central Florida Gliders lasted 6 months, the perfect amount of time to really build the appropriate base, develop the energy systems with multi-paced running, get in some benchmark races and generate a significant peak. The Gilders have always had great training programs and success in distance events, but I've tweaked it quite a bit over the past 2 years based on learnings from the USTFCCCA and USATF Level 2 endurance programs. Ashley typically trained 5-6 days per week (including recovery run days) throughout the 2 month General Preparation, 2 month Specific Preparation and 1 month Pre-Competition phases, and 4-5 days per week during the 1 month competition phase. VO2 max training (2-6 minute intervals at 3200m pace with rest = work) once every 7-10 days was key.

Talk about the type of runner Ashley is and what makes her so good?

She had a great run at the MS state meet, how does she peak for the postseason?

Unlike most middle and high school athletes, this wasn't the post season for Ashley, but exactly what we have been training for all year. So her excellent performances at the MS State Meet actually occurred during her specific preparation phase of the season with no tapering. In general, if one is really peaking for the MS or HS season, then the post season is about maintaining that peak for 4-6 weeks maximum. For those athletes that peak for the HS or MS State meet in May, I generally recommend 1-2 weeks off and treating the summer season as a separate mesocycle, similar to Indoor Track & Field because 11 weeks is too long to maintain a peak.

What events did Ashley compete in and what lessons did you both learn?

My goal for Ashley at this meet was top 3 in the 800m, 1500m, and 3000m, with a top showing in the 1500m. She competed in a total of 3 events and 6 races over a 5 day span at the 2015 USATF JO's -- 800m prelims, an unexpected 800m semi, 800 finals, 1500m prelims, 1500m final and the 3000m final. We had feasible plan in place to handle the heavy load of 5 races, but then USATF added a 6th race, the temperatures were steaming, some days moved to a rolling schedule and others had days had major delays. In addition, Ashley's competitive nature and inexperience prevented her from conserving energy in the preliminaries and doing just enough to advance, so the big F - fatigue started to set in as the finals rolled around on the weekend.

Despite the fatigue, Ashley medaled in every event - 3rd in the 800m, 4th in the 1500m and 5th in the 3000m. She left everything on the track and was too fatigued after her final race to even accept her 3rd medal. I believe fatigue was the difference between 2nd and 3rd in the 800m, 1st and 4th in the 1500m and 2nd and 5th in the 3000m. For future Junior Olympics games we will compete in no more than 4 races or 2 events over 5 days.

Only a 7th grader (rising 8th) when and how did she get started in running? How do you maintain her success at such a young age?

Maintaining success at a young age requires the coach putting what's best for the athlete's long term development above everything else, while keeping things motivational, educational and fun.

What were her thoughts after she ran that 4:38 in the PRELIMS? Then she came back and ran 2:15 in the 800m that afternoon!

Ashley can better answer this. In the 1500m she simply followed the race strategy similar to her spectacular 4:48 1500m run at the ERU meet in April. The goal was to do enough to advance and PR. But Ashley felt great and went for it and amazed us all with a 4:38 1500m and a 1:10 final lap. She was ecstatic! Then to come back that evening and run a 2:15 PR in an unplanned 800m semifinals after a 2.5 hour delay in intense heat and humidity takes a truly special athlete. We considered dropping the 800m semis and final because of the unplanned increased work load in hot conditions, but that's a hard pill for a strong competitor to swallow.

Anything else you want to add?