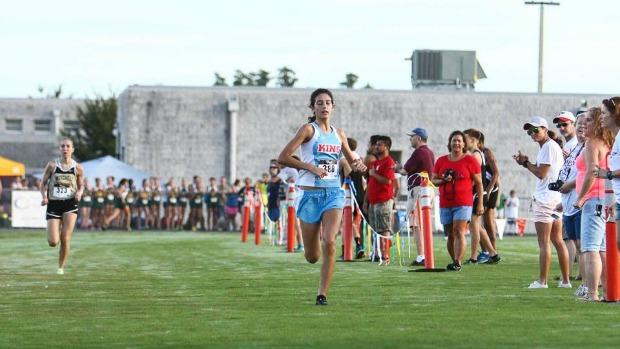 Around this time last year, King's Micaela Torres was going into districts feeling pretty confident. With a fourth-place finish at the Hillsborough County Championships the week prior and a PR of 19:29.45 set at Disney, Torres looked to the 3A District 9 meet as another shot to challenge Chamberlain's Maggie Parrish and cinch the district title.

Her right leg had been bothering her some, but she was still PR'ing in her races. She'd take it easy in the workouts and run the races hard. Districts would be no different.

She started the race well, climbing up the first hill at Dover Trails in the right position, but midway, the race started to blur. Torres remembers her teammates passing her, although she didn't feel like she was slowing down. Then, every step began to hurt. Each time she'd put her foot on the ground, there was pain.

About 400 meters from the finish line-Torres still remembers the exact spot- she collapsed.

"I was obviously really upset, crying and everything because of the pain and because I didn't want to let my team down," Torres said. "I was hoping to win districts that day."

After that Wednesday, she wouldn't run for another 30 weeks. A visit to a walk-in clinic revealed a fracture in her right tibia, leaving her in a cast.

At regionals, Torres watched from a wheelchair. Despite losing Torres, their top runner, they placed sixth, qualifying for states. Had she been able to race, it would have been Torres' first trip to a state meet, cross country or track.

Torres' recovery was slow- at first, she was only able to walk with weights to work on her arms. As the months went on, she gradually transitioned into running again.

"The first time I ran again I was so thankful because it felt so good to actually be moving and being on my same routine," she said. "Of course I was tough on myself because I wasn't where I left off at and I felt like I lost everything I worked so hard for, but my coach just told me that it'll slowly come back to me."

And, slowly, it did. She missed almost the entire track season- her only races were the 1600 and 3200 at the King Quad- but as cross country season rolled around, she got more and more training in.

At her first meet this season, Torres ran a 23:08.50. At Disney, her most recent meet (she missed the Hillsborough County Championships for an IB pinning ceremony) she ran a 20:12.80, an almost three-minute improvement.

"I now feel that I am getting back into things slowly but surely I tell people," she said. "Disney is a tough course and it was pretty hot when we raced but I'm proud of my time and my team for getting through it."

Now, with Monday's district meet marking almost a year to when she broke her leg, Torres is preparing to run this postseason how she had planned to run last year's.

"I am going to really have to push myself to make it out of regionals," Torres said. "I'm hoping that my whole team will make it because we have some really talented girls that just need the experience in a big race such as states to push themselves."

Based on season bests, she's ranked 15th in 3A Region 3, with many close behind. A trip to states isn't out of the question for her or her team, ranked sixth in Region 3 in the Week 7 FACA rankings, but it'll take a strong race.

A race that this year, Torres will be able to run in.

"For these next couple of weeks I am going to try and race how I used to with the same people I used to pace myself with," she said. "Although I'm not exactly where I left off, I'm headed in the right direction."