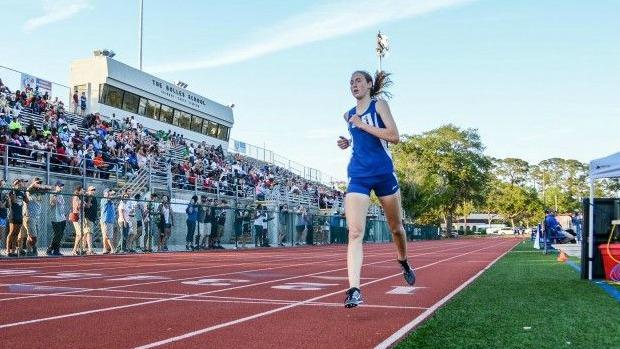 (Bolles sophomore Caitlin Collier pulled off the distance sweep at the state meet winning the 800,1600, and 3,200m runs and is up for Florida Girls Track & Field Athlete of the Year. Photo by Caleb Wilson)

Want to have your say in who is named the Florida Girls Track & Field Athlete of the Year? We narrowed it down to the top ten performers from the 2016 season. Now it is time to vote. Learn more about the nominees and select who you think deserves this honor. Voting will close Sunday, July 31st, at 11:59 p.m. The fan selected winner along with our choice for Athlete of the Year will be named on Monday, August 1st.

Nicole Breske - The Winter Park senior and FSU signee capped off her high school career with a 4A pole vault state championship. Breske, went undefeated during the regular season, jumping a then personal best 12'6" at the state meet. She was third at Flo Golden South and recently won the AAU Nationals Club Championship, and set a new PR of 12'8" at the Jacksonville Street Vault last weekend which moved her into the top ten all-time in state history.

Kayley Delay - Several top five finishes in both cross country and track, but Fletcher's Kayley Delay had never won a state title. That was until 2016, on a cold May night at IMG Academy, Delay dazzled the brave few that stayed to witness the 4A 3,200m run with what one college coach called the best 8 laps he's seen from a Florida high schooler in al long time, crossing the line in 10:30.30. Delay was also the runner-up in the 1,600m at the 4A state meet. She will be regarded as one of the top distance recruits in the class of 2017 from the state of Florida.

Briana Eskridge - Miami Northwestern wasn't just the best team in Florida, but one could argue the best team in the nation from top to bottom. The Lady Bulls scored a lot of points in the sprints hurdles, but Eskridge scored valuable points in the long jump, triple jump, and high jump. Eskridge won the 3A state championship in the high jump with a PR of 5'8", was third at state in the long jump with a PR of 19'0, and tallied eight more points with a runner-up finish in the triple jump with a mark of 39'0.5". The University of Nebraska signee surpassed the 40 ft. mark three times in 2016.

Sophia Falco - The Lakewood Ranch rising senior played an integral role in leading her team to the 4A state championship. Falco was 5th in the 200, runner-up in the 100m dash and triple jump, and won the state title in the long jump. In the long jump she cleared 20 feet or more three times including wins at Flo Golden South and 5th place showing at New Balance Nationals Outdoor. She was also 5th at that meet in the 100m dash and was first in the triple jump with a personal best of 40'5", her second jump of the year over 40 feet.

Jan'Taijah Ford - Ford is the lone freshman on this list. The youngster came in with a lot of hype from the middle school ranks and lived up to it finishing first or second in every final she ran. Ford ran a PR of 24.25 in the 200m dash and finished as the 3A state runner-up the following week. In the quarter-mile, she was one of only four athletes in the state to run under 54 seconds going 54.01 for the 3A state title, and following up with a PR of 53.77 to win Flo Golden South, and 53.83 to place second at Brooks PR. Even more dynamic was her second leg on the team's 4x400m relay that beat Miami Northwestern for the first time in forever to win the championship.

Bailey Herteinstein - Only a sophomore, Hertenstein showed her consistency from cross country on the track this season. The Riverview standout went for the triple at the state meet and came away with a runner-up finish in the 800, state title in the 1,600m in one of the gutsiest races of all time, and a third place finish in the 3,200m. In her 20 races, between the three events, she won all but three of them.

Timetria Mitchell - Nobody was more dominant in the hurdles in the Sunshine State then Miami Northwestern senior and University of Florida signee Timetria Mitchell. Mitchell won her third straight 110m hurdle state championship and was runner-up in the 300m hurdles. Her 110mH PR of 13.52 from New Balance Nationals Outdoor is the 14th best in the country, while her 300mH time of 41.68 is 10th nationally.

Amuru Patterson - If you told people around the state the sprinter we'd be talking about by the end of the year was Haines City rising senior Amuru Patterson, I'm not sure how many people would take you up on that. It's true though. Patterson proved she belonged sweeping 4A titles in the 100 and 200m dash then winning both events at Flo Golden South. With the choice to go to Brooks PR or adidas Dream 100, she chose the latter and brought the belt back to the Sunshine State for yet another year.  Patterson was DQ'ed in the 100 at the AAU Nationals Club Championship, and was second in the 200m dash. She ended her season with personal bests of 11.57 and 23.65.

Katia Seymour - The fastest 100m dash in the country came from Palatka High School junior Katia Seymour when she ran 11.26 at altitude in New Mexico at the Great Southwest Classic. Seymour recorded the sprint double winning the 100 and 200m at the 2A state meet and anchoring one of the best relay comebacks I've ever seen in the 4x1. Seymour was third at Flo Golden South, second at adidas Dream 100 behind Patterson, and was recently crowned AAU Nationals Club Championship 100m winner in the 17-18 year old age group. She beat Patterson in a head to head match up in the 200m dash at AAU Nationals Club Championship in a US#4 time of 23.26.