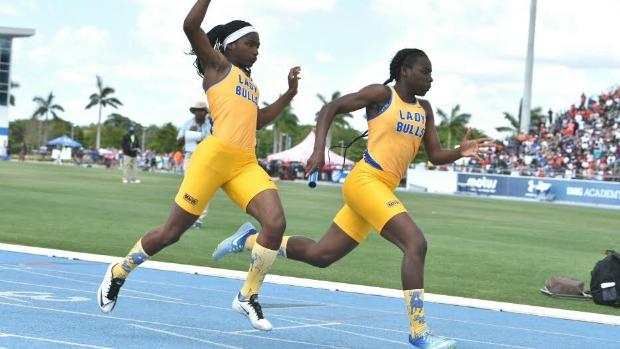 The torrential weather that haunted FHSAA state track meets in years past must have built up some karma for the 2017 meet as the day broke beautiful and breezy at IMG Academy in Bradenton. With most of the running finals set for Saturday, athletes in field events, distance races and prelims made some big waves on Friday.

Defending discus state champion Jarez Parks, who is headed to The Unversity of Alabama on a football scholarship, got into a Class 3A competition that took the form of a home run derby with multiple throwers blasting out huge marks. Parks won last year's meet with a 55.57m(182-4). He would need a bit more than that as Niceville's hit a 61.17m (200-8) throw on his final attempt, shattering his personal best. Parks still had one throw left, already with a 60.60m in his pocket. He lined up, spun and let it rip and an audible gasp could be heard from spectators. The disc landed 64.15m (210-5) out for the win, a personal best and a new state record. The previous record was set by Westley Stockbarger of Charlotte in 2004. 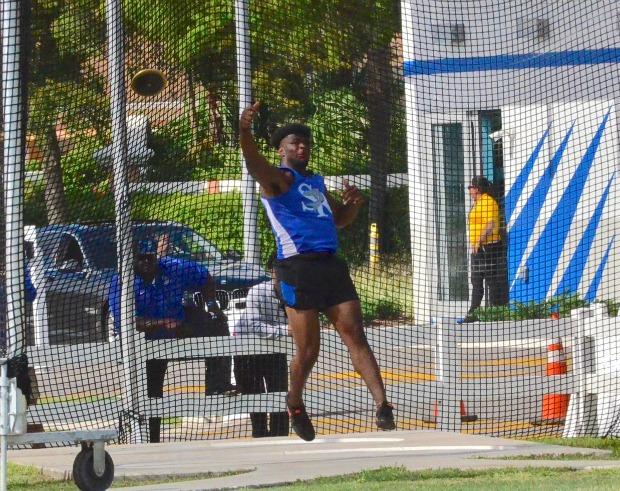 "This is what I needed," an emotional Parks said. "I've been working my butt off for this and on that last throw, I just let it out."

There was a dose of controversy as a coach's challenge claimed that Parks had stepped out of the ring but meet officials ruled it a good throw and Parks took home the hardware. Parks also won the 3A shot put at 17.70m (58-1). Still, it was a tremendous throw from Shelikoff, who demolished his PR by more than seven feet.

"When I'm at a small meet, I usually try to just get one good throw in. Here, you had guys throwing 200 feet on their first throw," Shelikoff said. "You have to throw with your competition." 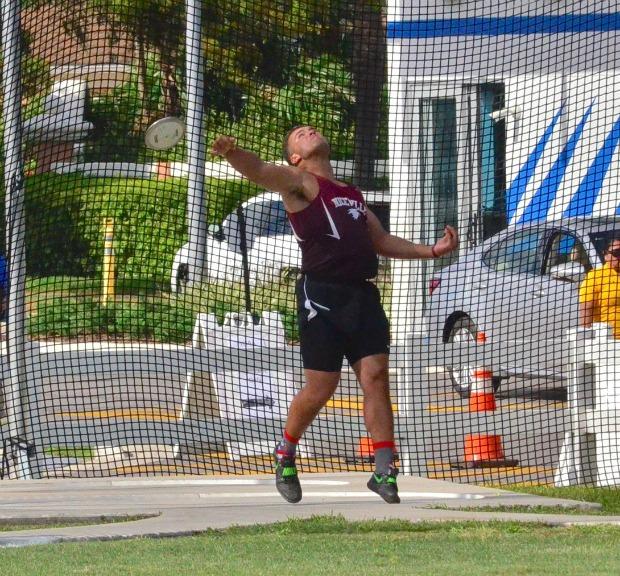 Not to be out-done and still with their finals appearance on Saturday, the Miami Northwestern 4x100m relay of Taranique Alexander, Twanisha Terry, Christon Kingcade and Markalah Hart put the state of Florida and the whole country on notice, running a 45.20. That time sets a new school record, season best and a new US #1 time.

"When I got the hand off, I looked at the clock and I knew we were liable to run a fast time," Terry said.

The finals on Saturday should be sizzling. 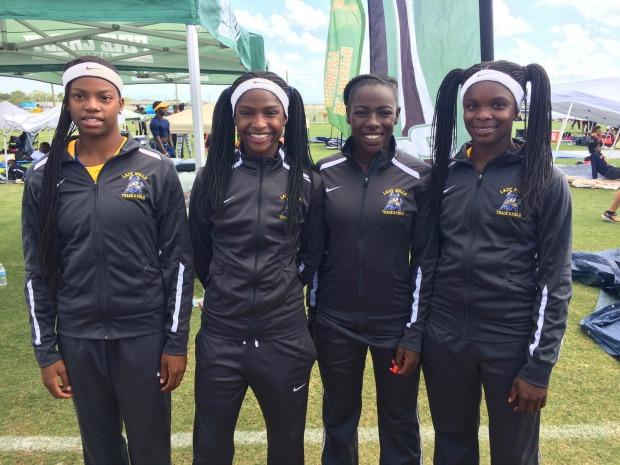 "I had no idea what time we were running but just trying to run a little faster," Hart said. "We're at state, we have to." 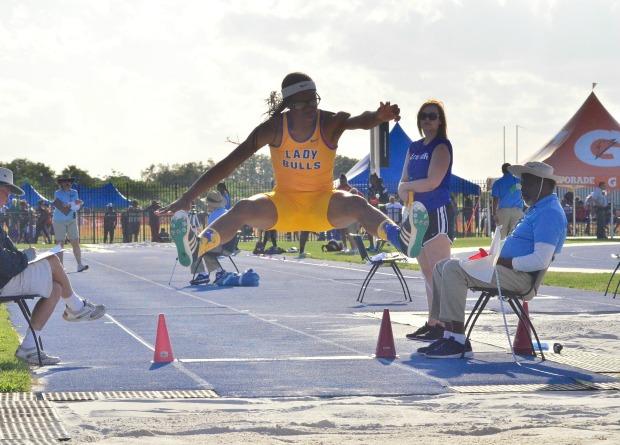 On the boys side, the American Heritage relay looked poised to if not break the state record on Friday, to at least break it in the finals on Saturday. It never happened, as coach Greg Barnes said, "everything went wrong". Problems with the exchanges compounded and the boys wound up in ninth, just missing qualifying for Saturday's final by an eight-hundredths of a second.

Distance doubles were up for grabs as both the 800m and 3200m final were both on Friday. Bolles' Caitlin Collier got hers, coming up from third place on the final lap. By the home stretch, it was Collier in at 2:10.65, ahead of Eastside's Jordynn Tyndall (2:12.61). In the 3200m, Collier again was content to sit back and calculate her race.

"I am thinking my team has a good chance, so I'm thinking more about the win and it not mattering so much about time," Collier said. "It takes a lot of patience because you're anxious and you want to get out ahead."

In the 2A 3200m final, Collier again, came up from third place to run down the field and take the title, this time in 10:30.39. Key West sophomore Nicole Matysik took second in 10:35.58. It marked the second straight year Collier won both titles. 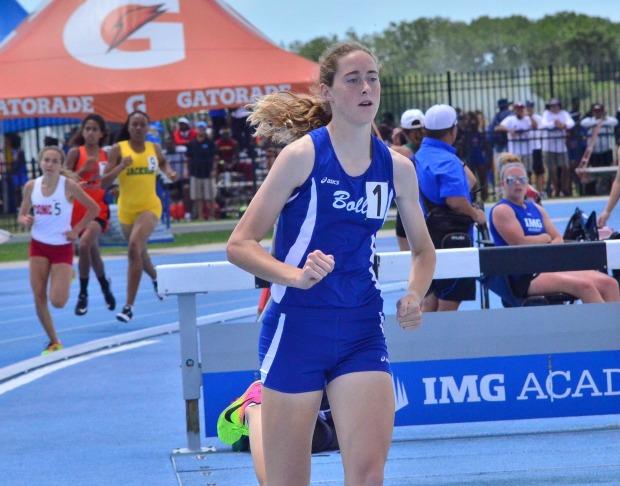 Fort Myers' Kristlin Gear pulled the same feat in Class 3A. Gear moved into second on the last turn and turned up her kick to blast it in for a 2:10.29, just getting past Niceville's Abbie Harrelson (2:10.71). Gear's chances in the 3200m final, looked dim for most of the race. Lincoln freshman Alyson Churchill got out to a withering pace, putting pressure on the rest of the field.

"I'm not one who likes to settle for second but there was no way I was going to beat her (Churchill)," Gear said. "But then on that final lap, I felt a burst of energy."

With three laps to go, Churchill led Gear by 15 seconds. Gear started clawing back track with East Lake's Jennifer Lima nearby. Into the final lap, Gear separated from Lima and closed even more on Churchill. Gear swung out to move around on the last turn, ramped up her signature kick and passed Churchill with 20 meters to go. Gear won it in 10:40.50 with Churchill in second at 10:42.82. 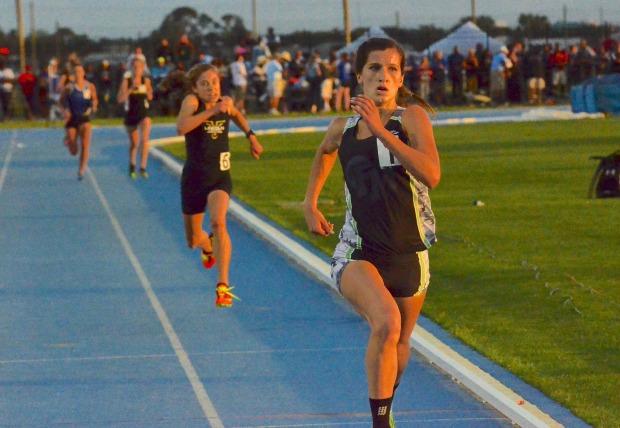 "She (Churchill) ran the race so excellently, mentally, that breaks people," Gear said.

It did not break Gear as she won the 3200m for the second straight year.

"I tried to channel my workouts, stay focused, keep my form and use my kick," Blair said. "The last few meters, I just gave it my all." 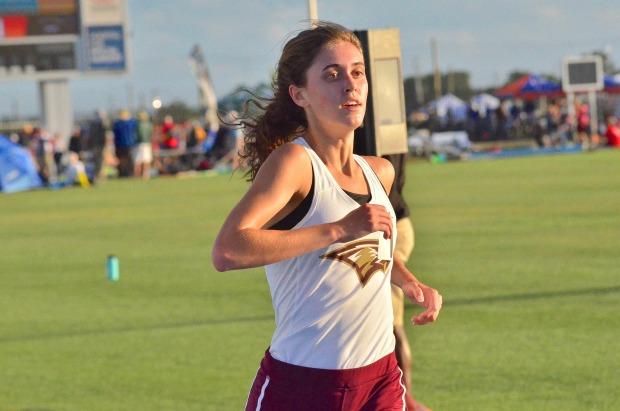 Both state champs Morgan Brown of Calvary Christian and Sofia Falco of Lakewood Ranch got wildcards thrown into their field events. Brown, the defending 1A state pole vault champ, cleared 3.25m and then found out she had to run on the 4x100m relay. Preferring to stay at pole vault, she relied on an alternate that did not show up. She would have to run it or be scratched from the meet. She ran it and helped the relay take eighth in 50.77 and qualify for the finals.

"She (Brown) just barely got there in time to step in the lane and run the 4x1," 727 Track Club coach Dave Mason said. "That doesn't mean my heart wasn't having palpatations." 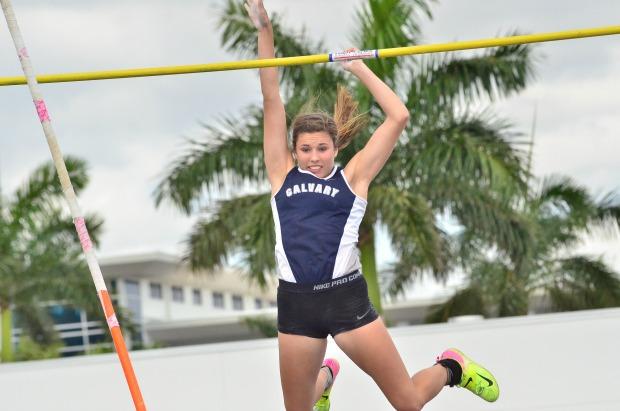 "I was thinking I couldn't leave pole vault, I was the reigning champ," Brown said. "But they gave me enough time and I was able to recoup and jump again." 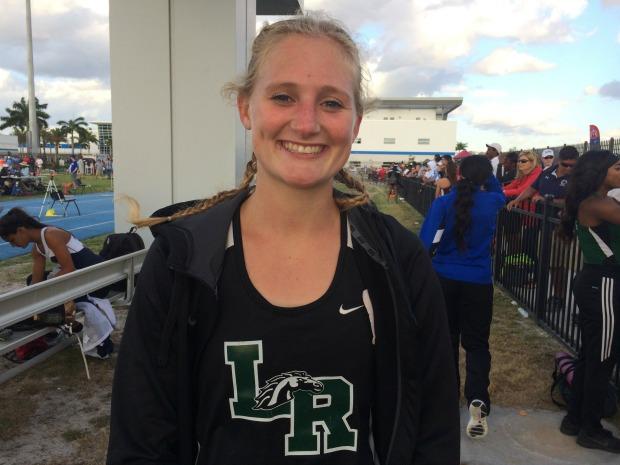 "They called (200m prelims) during the first flight (of long jump) and I waited until 2A ran and checked out of long jump," Falco said. "I always like a challenge."

Ransom Everglades' Anne Gutierrez won the 2A girls pole vault at 3.50m (11-5.75) with former state champ and state record holder Nati Sheppard, now at Duke University, on hand to see it. It took a jump off with Bolles freshman Laine Roberts but Gutierrez won it. Gutierrez took second in jump offs at last year's meet.

"This was the first meet I used a longer approach," Gutierrez said. "It worked out."

Mulberry freshman Arian Smith won the boys 2A long jump at 7.19m (23-7.25). It was Smith's first state title. There could be many more in Smith's future.

"I felt like that jump would be out there," Smith said. 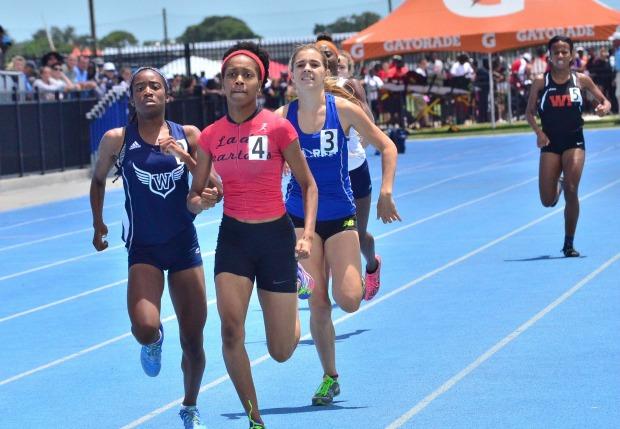 "It was a surreal moment, knowing you won your first state title and coming back from a fracture in my foot last year," Rivera said. "You're going to have setbacks, it's about how you respond." 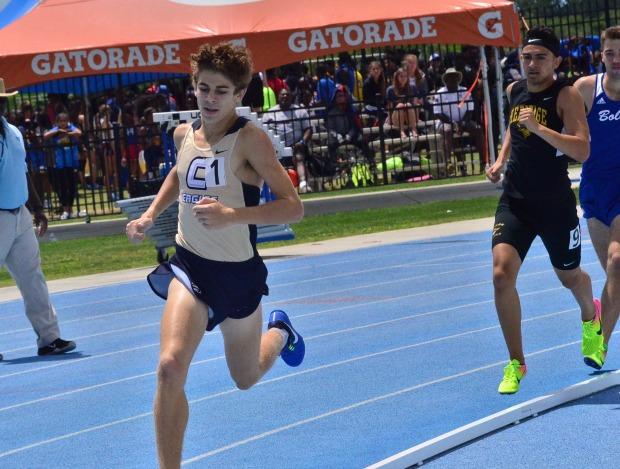